It appears to another classic short squeeze for the 3D printing maker.

What: Shares of 3D Systems (DDD -3.73%) were sharply higher during early trading on Wednesday absent of any major news. At one point before noon, 3D Systems' stock was up over 14%, while competitor Stratasys (SSYS -2.40%) was up over 4%.

So what: 3D Systems' stock has lost nearly 75% of its value over the last year and short interest continues to remain high. As of Jan. 15, nearly one-third of 3D Systems' shares outstanding were sold short, which indicates strong bearish sentiment toward the company's prospects. 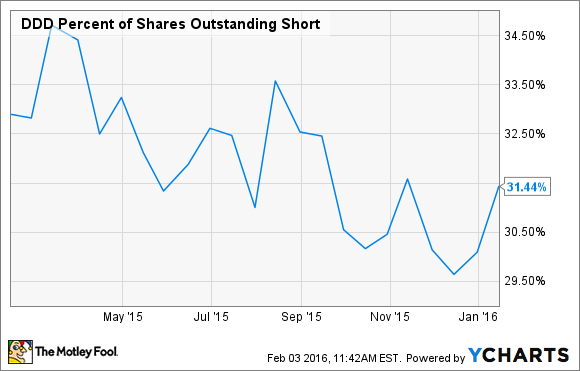 Although there's no way to prove it definitively, 3D Systems' price action today appears to be a classic "short squeeze." After all, 3D Systems is a heavily shorted stock that moved rapidly higher, on above average volume, without any apparent news. Behind the scenes, this could mean a flood of bears closed out their short positions by quickly buying back shares and created the squeeze.

Now what: It's been a rough couple of years for 3D Systems and Stratasys. Both companies have struggled with execution while dealing with a slowing customer spending environment. The threat of increased competition remains on the horizon, as a number of well-funded entrants are expected to introduce 3D printers with breakthrough technologies later this year. All told, the current path forward isn't exactly clear for 3D Systems and Stratasys investors.