Please ensure Javascript is enabled for purposes of website accessibility
Log In Help Join The Motley Fool
Free Article Join Over 1 Million Premium Members And Get More In-Depth Stock Guidance and Research
By Daniel B. Kline – Feb 3, 2016 at 8:59AM

The company climbed after its late-October earnings report, but it hit a wall, which it then fell off of in the new year.

Yelp (YELP 2.03%) saw its stock price fall of a cliff in January, and the only reason appears to be that the big boys have stepped up their efforts to go after local revenue. 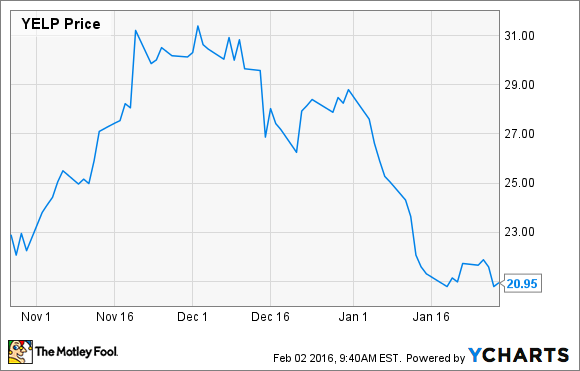 Yelp gained after reporting and then fell off a cliff in January. Source: YCharts.com.

What: The company, which reports its Q4 results on Feb. 9, actually had a decent third quarter. Yelp grew revenue to $143.6 million, a 40% increase over the third quarter of 2014, according to its earnings release. But, while revenue grew, the company lost $8.1 million compared to a net income of $3.6 million, or $0.05 per share, in the same period a year ago.

Still, the review company's stock did not fall upon the release of its Q3 numbers. It actually began a steady climb that ended in January when the company opened at $28.40 on Jan. 4, the first market day of the month, and closed at $27.60, beginning a steady decline that left it at $20.95 when the month closed, according to S&P Capital IQ data. That's a 26% drop, which is a huge fall when nothing obviously negative happened.

So what: Yelp has a solid business, and it's a (mostly) trusted source for crowd-sourced reviews of local business, specifically restaurants. The main problem facing the company is that its services can easily be duplicated or replaced by larger rivals.

Now what: When you report decent results and slowly see your stock's momentum turn into a crushing loss, it's clear that something big needs to change. The company seems aware of this, too, as much of its Q3 earnings release focused on the growth of its app.

"App Unique Devices grew 39% year over year to 20 million," according to the company. App users were also the most engaged Yelp users; approximately 70% of page views came from the mobile app.

Those are strong numbers the company has to work to grow because directed app traffic is more resilient. Yelp still has the problem of social media sites answering its potential users' questions before the they think to ask. That's not an easy problem to solve, and it's one that actually makes it at least worth considering if Yelp needs to be acquired by a bigger player in order to thrive.

Yelp has a user base, solid content, and a large, strong salesforce. But, those may not be enough to keep the company growing in the face of much bigger players that want the local revenue it's going after.

Daniel Kline has no position in any stocks mentioned. The Motley Fool recommends Yelp. Try any of our Foolish newsletter services free for 30 days. We Fools may not all hold the same opinions, but we all believe that considering a diverse range of insights makes us better investors. The Motley Fool has a disclosure policy.