The world's largest professional network reports earnings on Thursday. In this earnings preview, we highlight essential areas for shareholders to focus on as the company shifts gears into 2016. 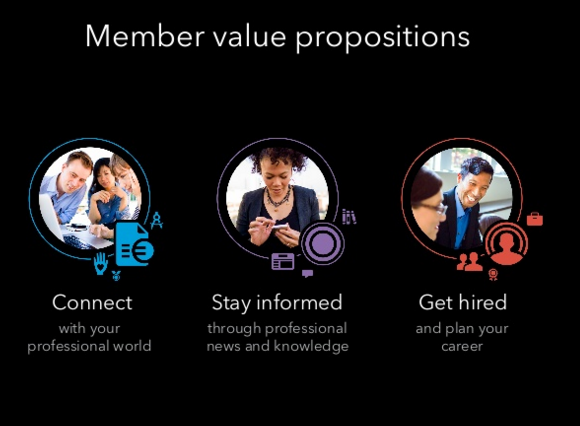 Simple and effective: This slide from a recent investor presentation highlights the platform's value to a user in five words. Image source: LinkedIn Corporation.

Professional networking platform provider LinkedIn Corporation (LNKD.DL) releases fourth-quarter 2015 earnings after the markets close on Thursday. Below, let's briefly walk through key areas investors should hone in on, both for the quarter and for the year ahead.

The numbers
Perhaps the most pertinent question this report will answer relates to top-line growth. Can LinkedIn maintain the crisp momentum it exhibited in Q3 2015, in which revenue increased 37% versus the prior comparable quarter? Management has projected similarly vigorous fourth-quarter revenue, in the range of $845 million-$850 million. Hitting this target would represent a lower but still credible percentage increase of between 31% and 32% over Q4 2014.

As for earnings, management has projected adjusted EBITDA, or earnings before interest, taxes, depreciation, and amortization, of $210 million for the fourth quarter, or about 25% of revenue, which is in line with the fourth quarter of 2014. LinkedIn typically likes to highlight adjusted EBITDA. That's because in most quarters it runs at a loss under the generally accepted accounting principles, or GAAP, by which U.S. companies are required to report earnings.

The most significant tweak management makes each quarter to arrive at adjusted EBITDA is stock compensation expense. Growth companies like LinkedIn, especially in the technology industry, use stock compensation both as an employee incentive and as a means to conserve cash.

After accounting for fourth-quarter projected stock compensation expense of $135 million, as well as projected depreciation and amortization expenses of $125 million, LinkedIn is essentially projecting EBITDA of roughly negative $50 million. Note that this isn't the same as the GAAP net loss, which will also account for interest expense, income taxes, and any "other" income and expense items.

The trends
As the company wraps up its fiscal year, it's a good idea for shareholders to assess the growth trend in talent solutions, the company's largest segment. In Q3 2015, talent solutions' revenue expanded at a rate of 46%, to $502 million. LinkedIn still derives the core of its sales from its hiring services within the talent solutions business. This set of services accounted for nearly 59% of LinkedIn's total revenue last quarter.

Also of note will be the contribution of learning and development within talent solutions. With the company's second-quarter 2015 acquisition of Lynda.com for $1.5 billion, LinkedIn has gained access to a wealth of content in the form of high-quality courses covering business, technology, foreign language, and creative discipline skills. In the first full quarter after acquisition, Lynda.com contributed $41.2 million to the talent solutions segment. That's nearly 8% of talent solutions' revenue and 5% of total company revenue.

While learning and development is still just a nascent part of LinkedIn's model, we can see its potential from its initial fast contribution to revenue. Education appears to be a field with wide potential, as LinkedIn has a built-in 300 million-member global audience to which it can market such content for years to come. It will be interesting to mark the sequential growth from Q3 of this budding revenue stream when the earnings report is filed.

Other items to watch
The executive team has cautioned that page views per unique visiting member, which grew at a rate of 20% last quarter over the prior year, may begin to decelerate in Q4 and into the near future. This is due in part to the company's effort to streamline its mobile experience and whittle down the number of pages a mobile user must navigate through on its platform. Management recently disclosed that mobile now accounts for 55% of all LinkedIn traffic, and continues to expand at twice the rate of overall member activity.

Page views may also decrease due to the company's effort to cut down on transactional engagement with users generated by emails and focus more on "quality engagement." The point's well taken: As LinkedIn matures as a platform, upping the sheer quantity of touches with members won't automatically increase profits. On the other hand, keeping users convinced that the network provides value to their careers should translate into sustained revenue opportunity for the company.

So far, vibrant markets like India, second only to the U.S. in cumulative members, and China, which has seen members triple since the introduction of a local language version in 2014, have supported the company's revenue momentum. This could change if the worldwide economy continues to stall in its increasingly tentative posture. On the other hand, such conditions might spur more frenzied professional networking, which would ultimately create a net revenue benefit for LinkedIn.