Even if Intuitive only captures a fraction of this market, it could mean big things.

Intutive Surgical's (ISRG -0.89%) stock has had a very good run over the past 20 months, returning almost 45% compared with the S&P 500's 5%. Much of that has to do with the fact that the company's daVinci Xi machine is being used for more and more "General Surgeries" in the United States.

In years past, prostatectomies and hysterectomies were the core procedures that accounted for well over half of all instances in which the daVinci was used. But those operations peaked, plateaued, and -- in the case of benign hysterectomies -- shrank. That's why the growth in "General Surgery" in the United States has been so important:

What four short years ago accounted for just 4% of all procedures has ballooned. More than one out of every five daVinci procedures now falls in the "General Surgery" category.

Though management opted not to break out specifics for what "General Surgery" means, listening to the conference calls makes it clear that hernia operations -- specifically ventral and inguinal hernias -- have been the major growth driver.

That leads to an interesting question: Just how big is the opportunity with hernia operations? 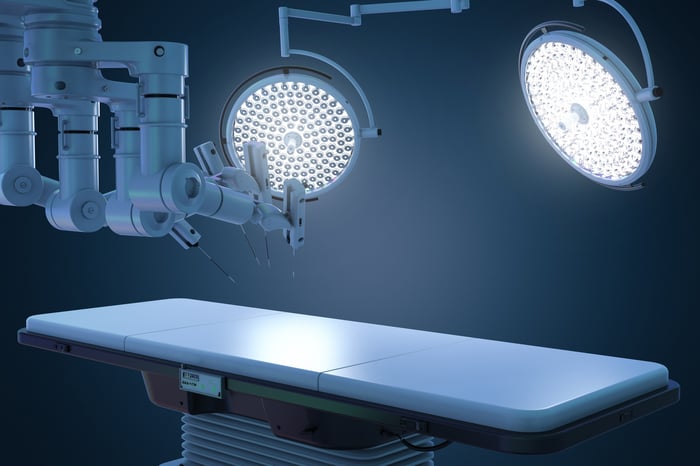 If we combine these two, we get a low-end estimate of roughly 1.1 million procedures per year just for these two types of hernias. That's a ton, considering that in 2015, Intuitive Surgical's machines performed approximately 652,000 procedures in total.

But let's not get ahead of ourselves. Intuitive will probably never capture 100% of this market. And if the daVinci becomes more prevalent in addressing hernias, it will face tighter scrutiny from governing bodies. That's exactly what happened with benign hysterectomies, as key opinion leaders began to vigorously question the efficacy of using the daVinci.

Management has already acknowledged this, saying in the company's most recent annual report:

"It is difficult to estimate the timing of and to what degree da Vinci hernia repair procedure volume will grow in the future. We expect a large portion of hernia repairs will continue to be performed in different modalities of surgery."

That last sentence is key, as it should squash any dreams investors have that hernia repair will lead to tremendous growth overnight.

But if we're thinking about what the total addressable market really is for hernias, I suggest we take as conservative an approach as possible. Let's assume "a large portion of hernia repairs" means that, at most, one-third of these procedures will occur with the use of a daVinci -- or 363,000 procedures.

What does this mean for the company?
Last year, there were 140,000 "General Surgery" procedures in the U.S. for Intuitive. If we assume that half of these were for ventral and inguinal hernias, that means that there's still lots of room for growth: If Intuitive were to reach the 363,000 threshold mentioned above, it would mean a quintupling (5x) of hernia operations.

Even if only a fraction of this benchmark were achieved, it could add over 100,000 procedures per year. That's a big deal, when there were 652,000 procedures total for the company in 2015.

But I can't stress enough that these are just my own estimates. It's possible that the total addressable market for such hernias is even lower than I've stipulated -- and that there are actually more hernia operations occurring than my numbers assume -- meaning less room for growth.

But there's a more important overlying message here: Intuitive's future is based on the fact that as doctors get more opportunities to test the daVinci on new procedures, it will become more helpful in improving patient outcomes, and hospital economics.

Even if the number of hernia operations "only" doubles before plateauing, it will represent a significant win for investors, the company, and patients.