The latest data shows that T-Mobile is catching up to Verizon Communications' (NYSE:VZ) LTE coverage, and already surpasses the carrier's LTE speeds in many locations. But that doesn't mean Verizon isn't looking to a future where its network far surpasses the competition's again.

That's why Verizon's talk about 5G wireless over the past few months is so intriguing. The carrier said back in September that it would begin testing a 5G cellular network at its headquarters at the end of 2015, and wanted to start a (slow) rollout of the network in 2017.

But as FierceWireless recently noted, some other global carriers are pushing up their proposed 5G timelines so that they can be the first carriers to offer the faster service.

And it's not just traditional telecoms that want to take the lead in 5G. Alphabet's (NASDAQ:GOOG) (NASDAQ:GOOGL) Google has its own plan to offer 5G connectivity as well. 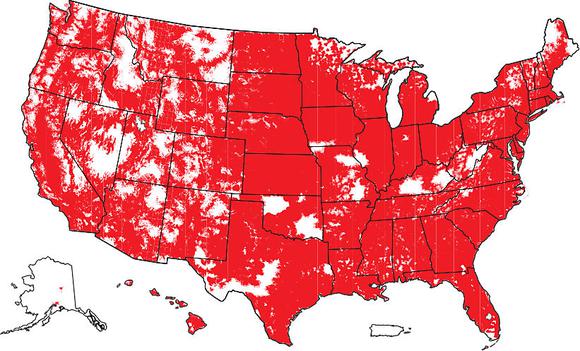 What Verizon's doing with 5G
Verizon says that after tests are finished at its headquarters, it'll begin field testing 5G throughout the U.S. some time this year. The company wants to be the first carrier to offer 5G service in the U.S., just as it was the first to roll out 4G coverage.

The 5G network could deliver speeds up to 50 times faster than the average LTE connection, and will be designed to better handle video traffic.

But the carrier isn't just working on 5G on its own. Verizon is collaborating with Ericsson, Samsung, Nokia, Cisco Systems, and others to create 5G standards. Before any official 5G network can launch, the companies will need to first determine exactly what the definition of 5G is.

What Google's doing with 5G
Google's approach to 5G is much different. A recent article in The Guardian reported the company is considering beaming millimeter-wave radio transmissions from solar-powered drones flying high above smartphone users. These radio waves can potentially transmit data up to 40 times faster than current 4G networks. The company calls the project SkyBender, and Google is reportedly already testing these 5G drones in New Mexico.

Some of the drones Google is using came from its acquisition of Titan Aerospace back in 2014. They can fly for up to five years without needing to come down, which would make them ideal tools for providing cellular coverage, without the need to build cell towers. The article says that Google believes it could one day have thousands of these solar-powered drones flying around providing cellular connections.

Why the companies are so interested in the tech
Verizon is clearly looking for a way to stay ahead of the other carriers in the U.S., especially as LTE coverage has become nearly ubiquitous. New OpenSignal data shows that Verizon's network provides an LTE signal to customers about 86% of the time, with AT&T (NYSE:T) coming in at 82% and T-Mobile with 81%. AT&T and T-Mobile are likely too close for Verizon's liking, and it needs a new way to set itself apart.

Google is more interested in offering faster Internet connections that will help promote its ad-based services. It's making a similar move with its gradual deployment of Google Fiber, which offers faster Internet speeds at lower prices than cable providers. Google believes that if it can control people's Internet connections, then it will have more opportunities to control how people use its services, and how they view online ads.

We'll have to wait a few more years before we see which company makes the most successful push into 5G, but it's becoming increasingly clear that investors need to keep an eye on how tech and telecom companies are building this next generation of wireless connectivity -- and which companies are falling behind.