When it rains, it pours, and this has been one very rainy week for the aerospace and defense supplier and its investors.

What: Shares of Esterline Technologies Corp. (ESL) are absolutely getting destroyed, down 31% as of 12:45 p.m. EST, after the company posted weak fourth-quarter results on Thursday evening, and shareholder rights law firm Johnson & Weaver LLP announced on Friday that it would investigate the company. 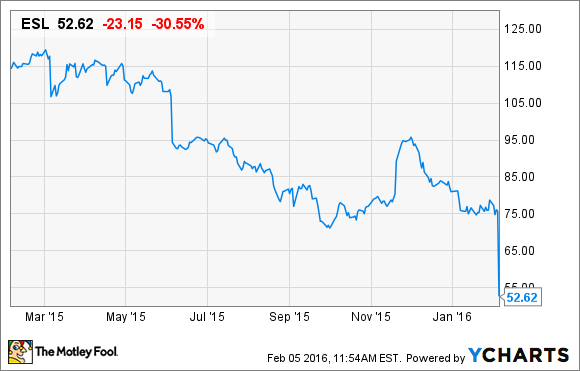 So what: First things first: The company fell short of analysts' estimates on both revenue and earnings in the first quarter. The aerospace and defense supplier recorded revenue of $441.5 million, missing the consensus estimate of $476.6 million.

While Esterline managed to post a small net income of $5.1 million -- which was an improvement from the loss it reported during the prior year's Q1 -- the company's adjusted earnings per share of $0.62 still fell far short of estimates of $1 per share.

Now what: But that wasn't the end of bad news for Esterline investors. On Friday morning, Johnson & Weaver said it was investigating the company and some of its officers for potential violations of federal securities law. Specifically, the law firm seeks to determine if any of Esterline's statements regarding its business and future prospects were false or misleading when made.

Developments like these can be difficult for the public to fully grasp until everything is all said and done, and by then, it's often too late for investors to act. Because of that, it's not surprising the stock is being massively sold off. Given that where there's smoke, there's frequently fire, I'd recommend watching this stock from the sidelines.