The market is sending shares of Hanesbrands lower after an anemic fourth quarter and guidance, but not everything was weak.

What: Shares of Hanesbrands (HBI -1.87%), a manufacturer and marketer of basic apparel of well-known brands since 1901, are tumbling 14% lower as of 11:30 a.m. ET after it missed estimates on earnings and provided a weak outlook. 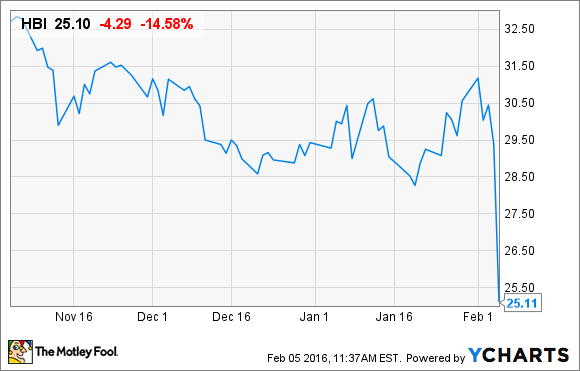 So what: During the fourth quarter, sales of Hanesbrands fell 7.4% to $1.4 billion on weak traffic and core sales -- which is stated in constant currency and excludes revenue from acquisitions before their anniversary, a retailer exit from Canada, and the effect of the 53rd week in 2014 -- dipped 5%. Thomson Reuters consensus estimates had projected revenue to reach $1.53 billion.

The problem for investors is likely the company's weaker-than-anticipated guidance. It is projecting to generate $1.85 to $1.91 per share on revenue between $5.8 billion to $5.9 billion in 2016. That's in line with earnings estimates of about $1.90 but below revenue projections of $6.04 billion in revenue, according to Thomson Reuters. Hanesbrand's fourth-quarter adjusted earnings per share checked in at $0.44, which fell short of consensus estimates calling for $0.46 per share. That said, the company's adjusted earnings still checked in 22% higher than the prior year's fourth quarter.

Now what: To me, this might be a little bit of a market overreaction. 2015 marked the third consecutive record year for the company and, yes, the fourth quarter was a bit rough, but its move toward premium products is working as evidenced by its margin growth. Adjusted operating profit margins jumped 180 basis points during the fourth quarter and 70 basis points for the full year.