Please ensure Javascript is enabled for purposes of website accessibility
Log In Help Join The Motley Fool
Free Article Join Over 1 Million Premium Members And Get More In-Depth Stock Guidance and Research
By Andrés Cardenal - Feb 5, 2016 at 6:26AM

Disappointing user growth is a major problem for Twitter, but the stock offers massive upside potential from current levels.

Investors in Twitter (TWTR -0.23%) are going through a lot of pain lately, as the stock is down by a staggering 65% from its highs of the last year because of disappointing user growth. This is an important problem for the company, and management needs to start delivering results in this crucial area sooner rather than later. On the other hand, it's important to note that Twitter stock looks notoriously cheap when compared against other companies in the industry, such as Facebook (META -0.79%) and LinkedIn (LNKD.DL). Is Twitter stock a buying opportunity for investors?

Twitter looks like a bargain
Twitter's main problem is lackluster user growth. The company ended the third quarter of 2015 with 320 million monthly users, an 11% increase versus the same quarter in 2014. Excluding SMS Fast Followers, Twitter has 307 million monthly users, a disappointing increase of only 8% year over year. Even worse, the user base is stagnant in the U.S., and this is a major drawback for the company, since users are the lifeblood of the business.

The bad news is that many potential users just don't understand how or why they should engage with Twitter. However, sales are still growing at full speed because of improving monetization. Total revenue jumped by 58% year over year in the third quarter of 2015. 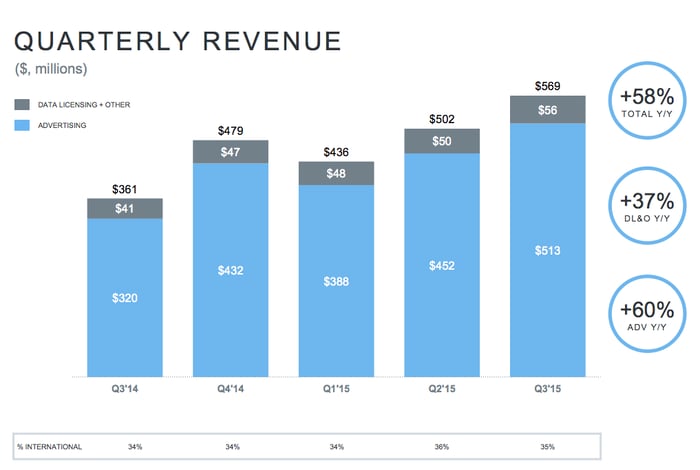 Besides, current valuation is reflecting the company's problems to a good degree. Twitter has a market capitalization value around $12.5 billion. This means that Twitter is worth nearly half the market capitalization of LinkedIn, in the neighborhood of $26 billion. On the other hand, the difference between the two companies is not that big when it comes to revenue, Wall Street is projecting $2.22 billion in revenue from Twitter and $2.99 billion from LinkedIn during 2015.

Twitter is, in fact, outgrowing LinkedIn in terms of sales. The professional network announced a 37% sales increase during the third quarter, reaching $780 million. LinkedIn makes nearly 80% of revenue from human resources solutions and premium subscriptions, not online advertising, so the comparison is not very straightforward. Still, it's worth noting that Twitter is materially cheaper than LinkedIn while also reporting faster revenue growth.

Facebook is an amazing success story, and the social network founded by Mark Zuckerberg is valued at a market capitalization around $320 billion. This means that Twitter is now approximately 4% the size of Facebook as measured by market cap. One year ago Facebook had a market cap value around $210 billion. Facebook has therefore gained $110 billion in market value, almost nine times the size of Twitter, in the past year alone.

Facebook is reporting explosive financial performance, especially for a company of its size. Revenues during the fourth quarter of 2015 came in at $5.84 billion, a 52% year-over-year increase. In addition, the business is widely profitable, as Facebook is producing operating margins in the neighborhood of 40% of revenue. Facebook stock is booming because all the key business variables are also moving in the right direction. Still, we shouldn't lose sight of the fact that Twitter is priced at only a small fraction of Facebook's current market value.

Is Twitter stock a buying opportunity?
Twitter is clearly disappointing when it comes to user growth, but management is doing a great job at driving revenue growth via increased monetization. This is something many analysts and commentators may be missing in the midst of all the negativity surrounding Twitter stock.

According to data from eMarketer, social media ad revenue is expected to amount to $32.9 billion in 2016, and Twitter owns just 9% of that market. The industry will most probably continue growing at a nice rate in the years ahead, and Twitter has a lot of room for market share expansion, so there is a good chance that Twitter will sustain rapid revenue growth in the coming years.

User growth is still remarkably important, and it will have a big impact on what kinds of returns Twitter stock can deliver for investors. Management is implementing multiple initiatives to make the platform simpler and more enjoyable. Among them, Twitter is adding more curated content via applications such as Moments and offering more video and visual content with products such as Periscope.

Twitter is scheduled to report earnings for the fourth quarter of 2015 on Feb. 10, and the coming earnings report will provide a big opportunity to take a look at the company's numbers and strategy. However, several key executives have announced that they're leaving the company lately. This includes the departure of former product head Kevin Weil and head of engineering Alex Roetter. The fact that top executives are leaving the company is hardly a good sign for investors. When things are going well, it's all smiles and congratulations, as opposed to resignations and rolling heads.

Only time will tell if Twitter can find a solution to its problems and accelerate user growth. However, one thing looks quite clear: Twitter stock is priced for depressed expectations. If the company can in fact deliver improvements in this area, then Twitter offers massive upside potential from current levels.

Andrés Cardenal owns shares of LinkedIn. The Motley Fool owns shares of and recommends Facebook, LinkedIn, and Twitter. Try any of our Foolish newsletter services free for 30 days. We Fools may not all hold the same opinions, but we all believe that considering a diverse range of insights makes us better investors. The Motley Fool has a disclosure policy.