Shares of Exact Sciences lost nearly 30% of their value in January, but new developments from the company were actually quite encouraging. 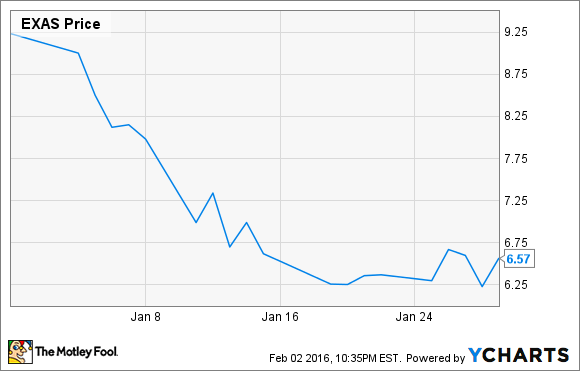 What: Shares of Exact Sciences (EXAS -2.74%), a molecular diagnostics company, were absolutely throttled in January, losing 29% according to data from S&P Capital IQ. The culprit behind the move? Look no further than weakening investor sentiment.

So what: In January the Nasdaq Biotechnology Index lost a whopping 21% of its value, and it dragged Big Pharma and diagnostics right down with it. What we witnessed from investors was a flight away from growth and risk and toward defensive investments and safety. This didn't mean that all drugmakers and diagnostic developers were off-limits, but those that are losing money got hammered.

In the case of Exact Sciences, the company has burned through $131 million in operating cash flow over the trailing 12-month period, and sales of its lead product, Cologuard, a diagnostic tool designed to noninvasively screen for colorectal cancer and advanced adenomas, have underperformed Wall Street's expectations. With volatility on the rise, companies that are losing money and projected to continue losing money for years to come are the easiest for investors to sell.

Lastly, it also doesn't help that Exact Sciences is one of the most short-sold stocks as a percentage of float. As of mid-January some 26.9 million shares were being held by short-sellers compared to a float of just 94.4 million. This demonstrates the amount of pessimism currently surrounding Exact Sciences.

Now what: Despite Exact Sciences' poor showing due to market uncertainty, the company actually had a pretty strong month when it came to new developments.

At the J.P. Morgan Healthcare Conference Exact Sciences offered guidance of 240,000 Cologuard screening tests in 2016 and between $90 million and $100 million in revenue, which is up in the neighborhood of 125% to 150% from 2015 levels. We also heard that 80% of Cologuard patients are currently being covered by Medicare, which is a good thing since it's being reimbursed at a rate of $509 per test.

Just days prior to the conference, Exact Sciences also announced an expanded agreement with Anthem (ELV -1.95%), the second-largest insurer in the U.S., to allow its Cologuard test to be a covered, in-network device in California. This latest agreement builds upon a prior agreement with Anthem from 2015, and the plan is to hopefully expand the test to some, or all, of the 13 states additional states that Anthem operates in.

But, good developments aside, we'll want to see substantial improvements in Cologuard screening and insurance coverage in 2016 before giving the company a clean bill of health. It'll be some time before Exact Sciences is profitable, so these steps will go a long way to proving the staying power of this diagnostic test and Exact Sciences.

The Motley Fool recommends Anthem. Try any of our Foolish newsletter services free for 30 days. We Fools may not all hold the same opinions, but we all believe that considering a diverse range of insights makes us better investors. The Motley Fool has a disclosure policy.