The struggling chip-company's stock surged during the fourth quarter of 2015 for no apparent reason, and the stock price fell back to earth during January.

What: Shares of Advanced Micro Devices (AMD -0.06%) tumbled 23.3% during January, according to S&P Capital IQ data. While the decline of the stock market as a whole was a major reason for the decline, a 65% rise in the stock price during the last three months of 2015 likely set the stock up for a fall. 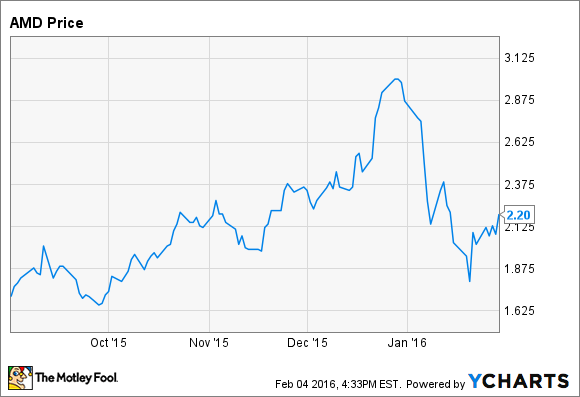 So what: AMD has been performing poorly for quite some time, and nothing during the fourth quarter warranted the huge run-up in the stock price. Sales of the major game consoles, for which AMD supplies chips, were strong during the holidays, but AMD's revenue from these sales is in decline due to lower average selling prices. During the fourth quarter, AMD's semi-custom revenue slumped 15.4% year over year, and semi-custom operating profit tumbled by 46%.

The decline in January brings shares of AMD roughly back to where they were prior to the fourth-quarter spike. With no genuinely good news during the past few months, it shouldn't be all that surprising that the stock's fourth-quarter gains didn't stick around.

Now what: With AMD struggling, 2016 will be an important year for the company. New graphics cards are set to launch -- the first from the company to use a FinFET process -- and AMD has a real shot at winning back at least some of the market share it's lost to rival NVIDIA (NVDA 4.07%) during the past 18 months. During the third quarter, NVIDIA shipped more than 80% of discrete graphics cards, up from about 60% in early 2014. NVIDIA also plans to launch new graphics cards this year, and AMD will need to be sure not to repeat the lackluster launch of its 2015 GPUs.

AMD's new Zen CPU microarchitecture is also expected by the end of the year. With the company promising 40% gains in instructions-per-cycle, AMD may be able to narrow the performance gap between its CPUs and those of Intel.

The company will need to win back some serious market share in the PC CPU market and the server CPU market in order to bring its computing and graphics segment back to profitability. It can be done, but it won't be easy, and investors shouldn't count on it.