Please ensure Javascript is enabled for purposes of website accessibility
Log In Help Join The Motley Fool
Free Article Join Over 1 Million Premium Members And Get More In-Depth Stock Guidance and Research
By Joe Tenebruso - Feb 6, 2016 at 8:33AM

The railroad is facing multiple challenges that could weigh on its share price in 2016.

The past year was cruel to Union Pacific (UNP 0.56%). The railroad operator's stock plummeted nearly 40% as plunging energy prices and slowing industrial production took a toll on its results. 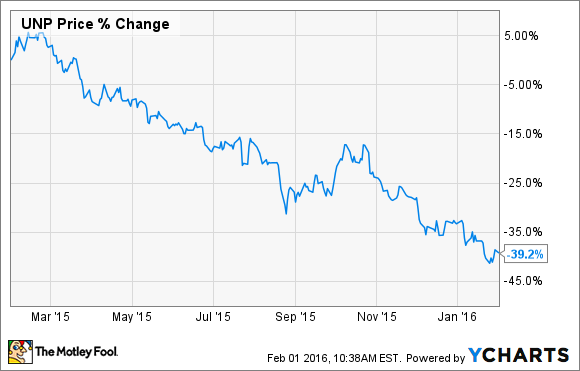 It appears 2016 may be another difficult year for Union Pacific. Here's why.

Sharply lower oil prices are reducing shipments of crude oil and hydraulic fracturing-related products
With the railroads becoming more dependent upon crude oil shipments to fuel growth in recent years, they have also become increasingly exposed to downturns in the energy industry. That's made the vicious decline in oil prices over the past year particularly painful. 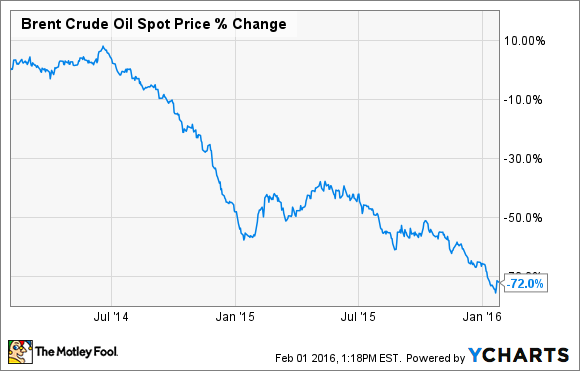 Union Pacific's crude oil shipments plunged 42% year over year in the fourth quarter, and a sharp reduction in rig counts and shale drilling resulted in a 52% decline in frack-sand car loadings.

Management expects these trends to continue to affect the railroad's results in the year ahead. "Low crude oil prices and unfavorable spreads will continue to present significant headwinds for crude by rail shipments," said Eric Butler, Union Pacific's vice president of marketing and sales, during the company's fourth-quarter conference call.

Management anticipates that, like oil shipments, coal demand will remain sluggish in the coming quarters. "We expect the coal market will continue to be dampened by low natural gas prices and high inventory levels," Butler said during the call.

But unlike oil prices, which the U.S Energy and Information Administration believes may begin to recover in 2016, there's little hope that coal demand will increase meaningfully in the years ahead. That's because the U.S and many other developed economies are moving away from coal and toward cheaper and cleaner natural gas. This is a long-term trend that will probably weigh on Union Pacific's business for the foreseeable future.

Foreign currency movements are taking a toll
Continued strength in the U.S. dollar could also dampen results, as it reduces demand for U.S. exports and, by extension, for Union Pacific's shipping services.

That was the case in the fourth quarter, when the strong U.S. dollar -- combined with lower commodity prices and a reduction in energy-related drilling -- helped lead to a 23% decline in revenue for Union Pacific's industrial segment.

Management expects more of the same in 2016. "Overall economic conditions, uncertainty in the energy markets, commodity prices, and the strength of the U.S. dollar will continue to have a major impact on our business this year," said CEO Lance Fritz in the company's Q4 earnings press release.

Joe Tenebruso has no position in any stocks mentioned. The Motley Fool has no position in any of the stocks mentioned. Try any of our Foolish newsletter services free for 30 days. We Fools may not all hold the same opinions, but we all believe that considering a diverse range of insights makes us better investors. The Motley Fool has a disclosure policy.