Please ensure Javascript is enabled for purposes of website accessibility
Log In Help Join The Motley Fool
Free Article Join Over 1 Million Premium Members And Get More In-Depth Stock Guidance and Research
By Daniel Miller – Feb 6, 2016 at 9:00AM

The industry saw many brands die off during the recession, but here goes another one -- but how much of a fail was Scion, really?

The automotive industry can be a brutal and competitive place to do business, no doubt about it. Entire automakers fail, some get a second chance like General Motors and Fiat Chrysler Automobiles, and some close up shop for good. It's the same for individual brands, such as GM's Hummer or Ford's Mercury, and just this week Toyota's (TM 0.09%) Scion is the latest automotive brand to get the axe – at least mostly.

The little brand that couldn't
The idea behind Toyota's Scion brand made sense back in 2003 when it was established as a separate brand from Toyota's mainstream namesake. Toyota was the same as it had ever been, a Japanese automaker that produced high-quality and fuel-efficient vehicles; the problem was the vehicles were often considered boring, a car your parents handed down to you for your first vehicle. Scion was Toyota's answer to shake things up and be a more exciting brand to help connect with younger consumers in the U.S., which, up to that point, it had mostly failed to do. At first the results looked promising. 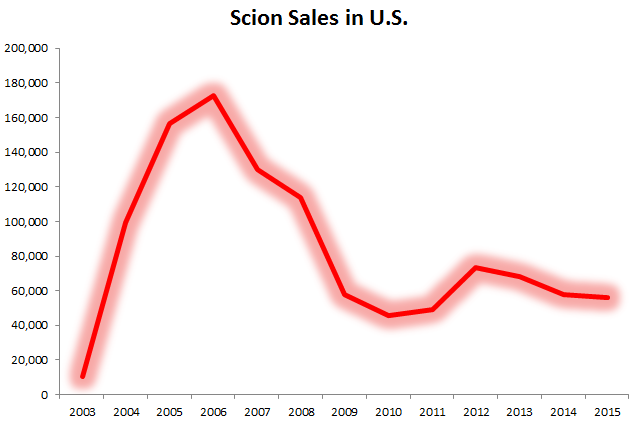 After Scion's initial success through 2006 things took a turn for the worse with the brand recording annual sales declines in seven of the next nine years. Scion's sales were already in decline before the recession put a stranglehold on U.S. new vehicle sales, something the brand never recovered from.

"This isn't a step backward for Scion; it's a leap forward for Toyota," argued Jim Lentz, founding vice president of Scion and now CEO of Toyota Motor North America, in a press release. "Scion has allowed us to fast track ideas that would have been challenging to test through the Toyota network."

While that statement is an impressive spin, worthy of a marketing or public relation prize, the truth is that Scion wasn't a complete fail.

Scion managed to build its dealer count to more than 1,000 and sold more than 1 million units in the U.S. during the brand's life from 2003-2015. Also, Scion did succeed in attracting a younger American consumer: Scion was consistently the youngest brand in the U.S. automotive industry with an average age of 36 years old, according to Toyota. Even in my own experience, when shopping for a vehicle in 2012, my list narrowed down to Scion's FR-S and Ford's Mustang – though, the Stang ended up winning my money. Toyota also points out that Scion served as a stomping ground for some of its future leaders, including Jim Lentz, Chief Executive Officer, Toyota Motor North America.

Selling cars is a tough business
The move to close shop on Scion as a brand and rebadge the iA, iM and FR-S under Toyota's umbrella for the 2017 model year shouldn't come as much of a surprise. Right now with cheap gas sales of gas SUVs and full-size trucks are all the rage and automakers are even reviving the mid-size truck market. Last month 58% of U.S. sales were light trucks, and Scion was practically an afterthought for consumers considering cars. It makes sense to take Scion's handful of "winners" and pull them into Toyota to try and keep some of its younger buyers.

Further, Detroit automakers are currently more competitive, or dare I say a real threat, in multiple passenger car segments which was far from the case when Scion was born. Ultimately, while not a complete failure, Toyota simply no longer needs Scion when you consider the entire brand's sales combined over the past seven years fails to outsell the Camry's sales in 2015 alone.