Mark Zuckerberg has grown the social network's mobile advertising business from nothing in just a few short years.

Do you remember in the first few months of Facebook's (META -0.74%) public life when everyone was worried about the company's transition to mobile? That may seem like ancient history, but it was really only a few years ago. At the time, Mark Zuckerberg pointed out that Facebook wasn't "really trying yet" to build its mobile business, even though its mobile app was already quite popular in terms of usage. 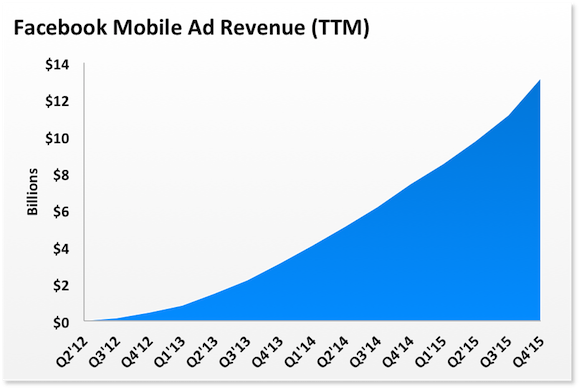 That's right: Facebook has now generated $13.2 billion in mobile ad revenue over the past four quarters.

There's plenty more where that came from
A couple years ago, Facebook began disclosing the percentage of advertising revenue that was attributable to mobile. This percentage has steadily risen over the years, too, from just 3% in Q2 2012 to 80% last quarter. But total advertising revenue has also been climbing at a healthy clip, so the net result is that the mobile ad business is booming.

That's a remarkable transition for Facebook to execute on in just under four years. If you look at Facebook's overall business, which includes things like desktop ads and the stagnant payments and fees business, mobile is now nearly three-quarters of all revenue. Facebook's total TTM revenue base is $17.9 billion.

For example, WhatsApp just officially reached 1 billion monthly active users, which is the threshold that Zuckerberg had previously specified as when he would start thinking seriously about monetizing the popular messaging service. If you hadn't guessed by now, the WhatsApp monetization strategy will very likely resemble the Messenger monetization strategy, which will start by connecting consumers to companies (and charging the companies). Plus, it's still early days for Instagram ad monetization, relatively speaking.

All right, Mark. We believe you now.