Please ensure Javascript is enabled for purposes of website accessibility
Log In Help Join The Motley Fool
Free Article Join Over 1 Million Premium Members And Get More In-Depth Stock Guidance and Research
By Matthew DiLallo - Feb 6, 2016 at 11:31AM

Refining stocks were the energy trade of 2015.

Kinder Morgan (KMI 1.75%) has often compared its business to a big aircraft carrier that can weather any storm in the market and barely feel a thing. That's because its business is primarily fee-based, providing it with very low sensitivity to commodity prices. But in 2015, the market wasn't interested in companies with low correlation to commodity prices, instead, it rewarded only those that strongly benefited from low oil prices, which is why refining stocks soared in 2015: 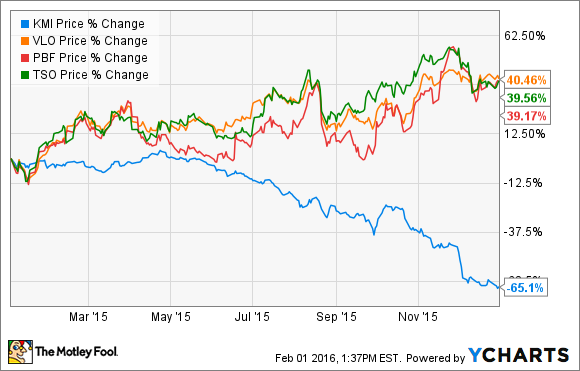 As that chart shows, refiners Valero Energy (VLO 1.60%), PBF Energy (PBF 3.60%), and Tesoro (ANDV) were all up about 40% last year, making them among the top performing energy stocks.

Why refiners soared in 2015
While low oil prices wreaked havoc on most of the energy industry, they were a dual benefit to refiners. Refineries benefited not only from cheap crude that lowered their feedstock costs, but also from the strong demand for gasoline that was fueled by lower prices. In fact, gasoline consumption increased by 2.6% last year to its highest level since 2007, which was well above average demand growth.

This situation combined to yield really strong refining margins, with Valero's throughput margin per barrel increasing from $11.05 in 2014 to $12.07 last year, or 17.4%. Those strong margins led to an equally strong increase in earnings, which were up 16.6% year over year. Tesero, likewise, enjoyed robust refining margins, which fueled record earnings last year.

These robust earnings left refiners flush with cash, the bulk of which was returned to investors. Valero Energy, for example, increased its dividend 80% last year, which is in stark contrast with Kinder Morgan's 75% dividend reduction. Further, Valero repurchased $2.8 billion of its own stock. Overall, the company returned 80% of its net income to investors in 2015. Tesoro, likewise, returned cash to investors with the company returning $870 million to shareholders via dividends and buybacks.

That being said, refiners didn't just send cash back to investors, but all three invested in high return growth projects. Tesoro invested $670 million last year, with $120 million of that capital geared to capturing margin improvements with another $255 million invested to grow its logistics operations. Meanwhile, PBF Energy went on a buying spree, announcing the acquisition of two refineries in 2015, which are expected to boost its capacity by more than 60%. Valero, likewise, invested heavily to grow its ability to consume more cheap crude, in order to further improve its margins.

What goes up ...
Having said all that, it's important to note that last year was a banner year for refiners, which enabled them to return a lot more cash than normal to investors while also investing heavily on future growth. That cash flow gusher probably won't be sustainable over the long term, especially if oil prices reverse course and rally. Contrast that with Kinder Morgan's cash flow, which as the chart below shows is typically very steady: 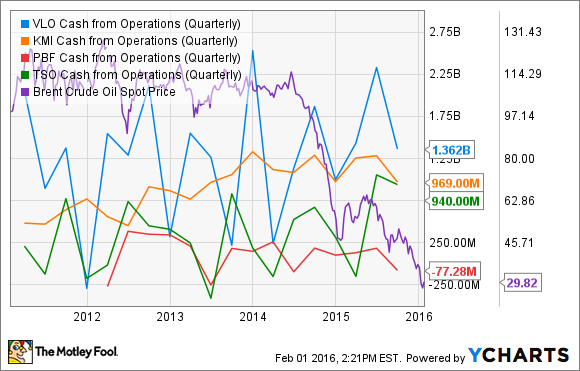 Not only is Kinder Morgan's cash flow pretty stable, but it has also generally headed higher over the past five years. Meanwhile, the cash flow of refiners can be quite volatile, especially when the price of oil makes a big move. That volatility works both ways, with it leading to a gusher of cash flow in good times while running dry in lean times.

Investor takeaway
While refining stocks were the big winners in 2015, they are really at the mercy of the price of oil. When the oil price is favorable, they win. Kinder Morgan, on the other hand, generates pretty stable cash flow quarter after quarter, regardless of what oil is doing. So while its stock performance might have been forgettable last year, over the long term its cash flow stability should prove to be very valuable.