It was another rough week for the healthcare sector, but this healthcare ETF performed the best.

It was another rough week to be an investor, as the S&P 500 took a big step back over the past few trading days. The index lost 3.1% of its value during the week, giving back all of last week's gains -- and then some. Healthcare investors weren't immune to the carnage, with all of the most popular healthcare-focused ETFs ending the trading week in the red. It was such a bad week for healthcare investors that the best-performing ETF of the group -- the iShares Dow Jones US Pharmaceuticals ETF (IHE -1.20%) -- still declined 3.21% for the week, lagging the S&P 500. 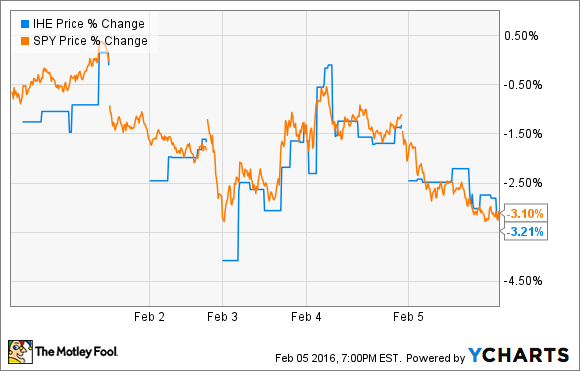 So what's going on inside the iShares Dow Jones US Pharmaceuticals ETF that allowed it to hold up better than most?

Cracking it open
As its name implies, the iShares Dow Jones US Pharmaceuticals ETF sets itself apart from other healthcare ETFs in holding the vast majority of its assets in just a handful of pharmaceutical giants.

Here's a list of the fund's current top 10 holdings:

The fund's oversized exposure to the big boys of the pharmaceutical space helped its share price hold up better than most during the volatile trading week.

What went right this week
There weren't many bright spots to highlight after this trading week, as every single one of this funds top 10 positions declined during the period. However, one of the better performing stocks of the group -- which isn't saying much --  was Merck (MRK -1.07%), whose shares declined a little over 2.5% for the week. 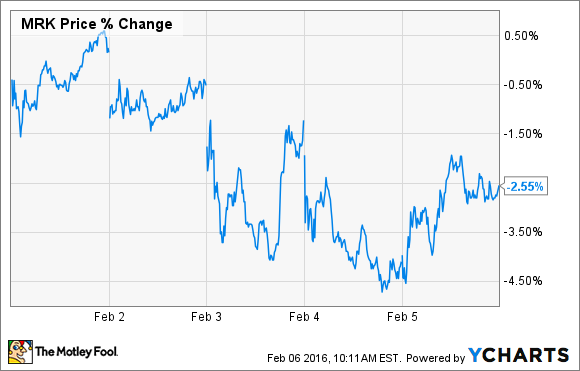 Merck's stock was down by much more after investors got a look at its fourth-quarter earnings results on Wednesday evening. The report contained mixed results. Adjusted earnings per share for the quarter rose 7% to $0.93 when compared with the year-ago period, which was good enough to beat analyst expectations by $0.02. However, the company's top line wasn't as rosy. Sales for the period were only $10.22 billion, down 2.5% versus the same time last year and a bit short of what Wall Street wanted. Merck's 2016 earnings-per-share forecast of $3.60 to $3.75 was also on the lower side of expectations, so shares took a small tumble.

However, Merck's shares did recover a bit on Friday, after the market learned that two of its new drugs had managed to win regulatory approval. First, Merck announced that its newly launched hepatitis C cure, Zepatier, is now approved for sale in Canada, after regulators gave it the go-ahead as a treatment for patients with genotypes 1, 3, and 4 of the disease. Second, its anti-nausea drug, Emend, also won FDA approval for use in combination with other treatments in patients undergoing chemotherapy.

Safety in a storm
If you're in the market for a healthcare-focused ETF that offers large-cap exposure to the pharmaceutical sector, then you might want to consider giving the iShares Dow Jones US Pharmaceuticals ETF a closer look.

Brian Feroldi has no position in any stocks mentioned. The Motley Fool recommends Johnson & Johnson and Mylan. Try any of our Foolish newsletter services free for 30 days. We Fools may not all hold the same opinions, but we all believe that considering a diverse range of insights makes us better investors. The Motley Fool has a disclosure policy.