What: After a dismal 2015, Macy's (M -3.24%) bounced back in January, riding a bullish wave in the apparel industry and gaining as value investors jumped in on the stock. As you can see from the chart below, the stock rose steadily throughout the month, bucking the sell-off in the wider market. 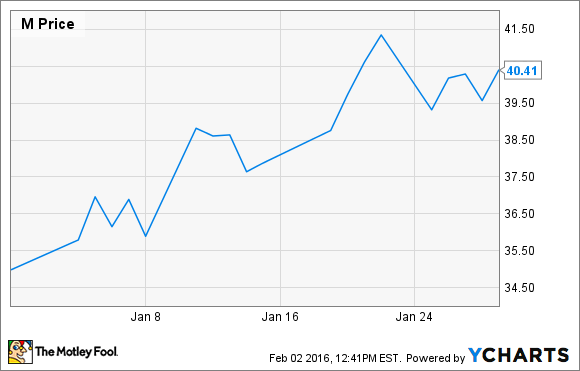 So what: Like many stocks that gained in January, Macy's fell sharply in 2015, indicating that the increase may be a result of an exaggerated sell-off last year.

The biggest piece of news from the company last month wasn't a particularly good one. Macy's said that comparable sales fell by 5.2% at company-owned stores during November and December, the key holiday selling season.  The slide was a notable contrast to rival J.C. Penney, whose comparable sales rose 3.9%, indicating that Macy's is losing market share. As a result of the drop, the company lowered its fiscal year EPS guidance for the year to $3.85-$3.90 from $4.20-$4.30.

Macy's also said it would initiate a cost-savings program that would cut annual general and administrative expenses by $400 million and close 40 stores, out of a total of 770.

Following the news, calls for Macy's to leverage its real estate portfolio increased. Activist investor Starboard Value argued in a letter to the board that a joint venutre structure would be the best way for the company to capitalize on its real estate, sending shares higher. Later in the month, reports revealed that noted value investor David Einhorn had taken a stake in Macy's, pumping the stock higher once again.

Now what: Macy's real estate holdings should put a floor on the stock, but the company's operations appear to be in disarray. Just this week, the department store chain announced a management shake-up, creation of new jobs in e-commerce and innovation, and the hiring of a new chief strategy officer.

The department store sector has been a slow grower for years now, and with a resurgent J.C. Penney biting into Macy's market share, the company may continue to struggle. Analysts project a 2% drop in revenue for the fiscal year that just began and a slight increase in earnings per share. Given the headwinds in its operations, I wouldn't be surprised to see Macy's unlock some more of its real estate value as it did when it sold the upper floors of its Brooklyn store, which resulted in a $250 million gain for the company.