Please ensure Javascript is enabled for purposes of website accessibility
Log In Help Join The Motley Fool
Free Article Join Over 1 Million Premium Members And Get More In-Depth Stock Guidance and Research
By Jeremy Bowman - Feb 6, 2016 at 9:59AM

Wall Street turned sour on the online travel industry, but there are still reasons to see long-term growth in Priceline's future.

What: Shares of online travel agent Priceline Group Inc. (BKNG 0.51%) were losing air last month, falling 17% as the beginning of 2016 was rough on the online travel industry. Priceline was hit by a couple of analyst downgrades, and tracked with the broader market, falling mostly through the first week of January. 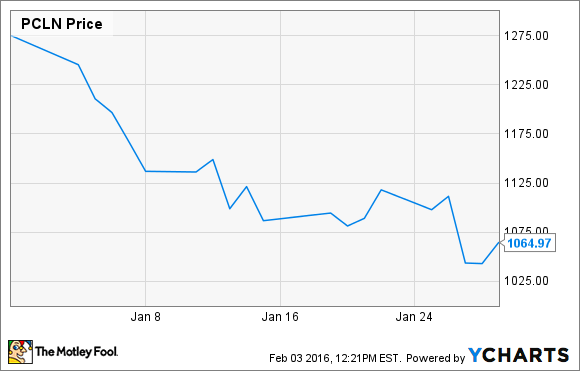 So what: On Jan. 5, Raymond James downgraded Priceline from from strong buy to outperform, citing competition from Airbnb and Expedia. The research firm noted that pressure from Airbnb was becoming a particular factor in Europe and that Expedia was gaining market share, though Priceline remains the global leader.

Later in the month, Goldman Sachs downgraded Priceline and its online travel peers TripAdvisor. The investment bank echoed Raymond James, citing Airbnb as a threat. Analyst Heath Terry cut Priceline from buy to neutral due to the strong dollar, and said that the company was well positioned for growth in Asia, but its inventory there was still smaller than in other regions. He also said that OTAs have already reached a high rate of market penetration, and that hotels with high occupancy rates may start demanding better deals.

Now what: Airbnb is certainly a disruptive force in the travel industry, but it is not going to replace hotels. The service has grown fast, but hotel rates have hardly flinched, evidence that the travel market is big enough for both of them. The home-sharing site also encourages travelers to take more trips, creating on opportunity for Priceline and its ilk to make money on airfares and rental cars.

Its international segment makes up almost 90% of the company's revenue so it's more protected from Airbnb, which is stronger domestically, than rival Expedia. While macro issues in some parts of the world could present temporary headwinds, cheap oil may also encourage more travel by providing discretionary income and lowering airfares. With analysts expecting nearly 20% EPS growth this year, the recent dip could present a good entry point for new investors.

Jeremy Bowman has no position in any stocks mentioned. The Motley Fool owns shares of and recommends Priceline Group and TripAdvisor. Try any of our Foolish newsletter services free for 30 days. We Fools may not all hold the same opinions, but we all believe that considering a diverse range of insights makes us better investors. The Motley Fool has a disclosure policy.