Please ensure Javascript is enabled for purposes of website accessibility
Log In Help Join The Motley Fool
Free Article Join Over 1 Million Premium Members And Get More In-Depth Stock Guidance and Research
By Jeremy Bowman – Feb 6, 2016 at 9:45AM

The once-promising IPO continued to flounder in January.

What: Shake Shack Inc (SHAK -0.13%) shares continued to fall last month, hitting post-IPO lows as the volatile stock was hit by the broader sell-off in the market. As you can see from the chart below, the stock sold off sharply through the first half of the month, but then recovered in the second half on enthusiasm for a new sandwich and an analyst upgrade. 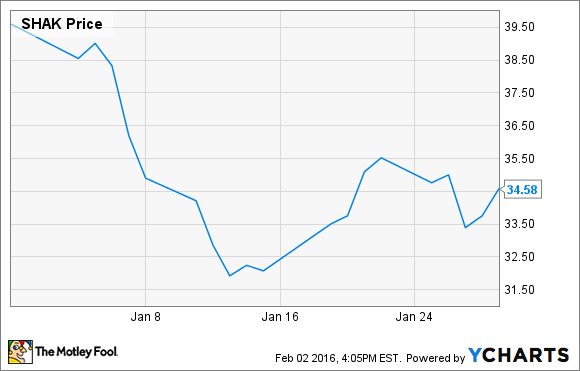 So what: There was no direct cause for the sell-off through the first two weeks of the month: it seemed to be mostly caused by downward momentum heading into the new year and perceptions that the stock was overvalued. Indeed, Shake Shack still carries a trailing P/E of near 150, a point naysayers and short-sellers have not hesitated to repeat. 66% of the stock was sold short as of January 15, evidence of the strong bearish sentiment against the stock, though the recent recovery may have squeezed some of the shorts.

It's clear that shorting the stock has become popular since it began falling in May, but after hitting a nadir of $30 in the second week of the year the stock began to recover.

On January 14, Shake Shack announced that it would take its Chick'n Shack chicken sandwich nationwide after a six-month testing period at its Brooklyn stores. The announcement was greeted with enthusiasm and rave reviews, and should help broaden the company's appeal and lower food costs, as poultry has been cheaper than beef lately. Later in the month, the stock also surged on an upgrade from William Blair, which said that the stock had become cheap enough to set up a compelling entry point. Blair is the only research firm out of 11 that rate the stock a buy, however.

Now what: The shorts may continue to rally against the stock, but there's good reason to think that Shake Shack reached a bottom last month. Although the stock still trades at a high valuation, the company has soared past analyst estimates in each of its quarterly earnings reports and looks primed to continue doing so based on current analyst estimates. The company also continues to outdo itself in new store expansion, as it plans to add 14 company-owned stores this year, increasing its base by a third. Those new locations, along with modest same-store sales growth expectations, should translate to a 2016 EPS that's handily above the analyst consensus at $0.39. I'd expect the stock to continue moving higher from here.

Jeremy Bowman owns shares of Shake Shack. The Motley Fool has no position in any of the stocks mentioned. Try any of our Foolish newsletter services free for 30 days. We Fools may not all hold the same opinions, but we all believe that considering a diverse range of insights makes us better investors. The Motley Fool has a disclosure policy.