The supermarket chain continued to stumble in 2016.

What: Shares of supermarket chain Supervalu (SVU) tumbled 33% last month, according to data from S&P Capital IQ, as a disappointing earnings report weighed on the troubled company. As you can see from the chart below, the majority of the decline came on a two-day swing on Jan. 12 and 13 when the stock lost 23% following the company's earnings report. 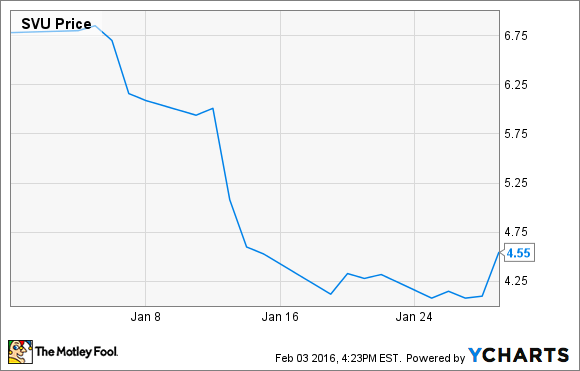 So what: Supervalu matched analyst estimates on the bottom line with a per-share profit of $0.16, but revenue fell 2.6% as the company saw negative same-store sales in all its divisions.  Revenue of $4.11 billion missed estimates at $4.15 billion.

In the aftermath, the stock was downgraded to "hold" by Deutsche Bank and Telsey Advisor Group. Deutsche Bank analyst Karen Short said the company's fundamentals are "shaky" and that she expects negative traffic trends to continue.

Supervalu saw a 3.4% drop in comparable sales at its Save-A-Lot chain, and a 2.6% decline in its retail food segment, which includes other banners. Those declines are just the latest in a series of disappointments, as the underperforming supermarket chains have lost business to competitors, including Wal-Mart, dollar stores, and drug stores as the grocery business has become more competitive.

Now what: Investors are hopeful that a plan to spin off Save-A-Lot will unlock value, but it's unclear if the deal will go through. The board approved the move last month, which would give shareholders an 80.1% stake in the new company, with Supervalu retaining the remainder. For many investors, Supervalu is seen as an asset play, as the company in the past has sold off banners like Jewel-Osco and Albertson's, though the stock has tumbled since then.

Separately, the company named Mark Gross as it next CEO, an executive who brings M&A experience to the table, to replace current CEO Sam Duncan at the end of the month. The stock sold off on the news.

Supervalu now trades at a P/E of just 6, which could be a bargain if the company can return to growth. As long as same-store sales are falling, however, the stock's likely to remain down, and a spinoff would only give shareholders a stake in two declining businesses.