What: Shares of Zumiez (NASDAQ:ZUMZ) bounced back from a miserable 2015 last month, climbing 20% thanks in part to a better-than-expected December sales report. As you can see from the chart below, the stock got a boost in the first week of the month, and remained volatile but continued to gain over the subsequent weeks. 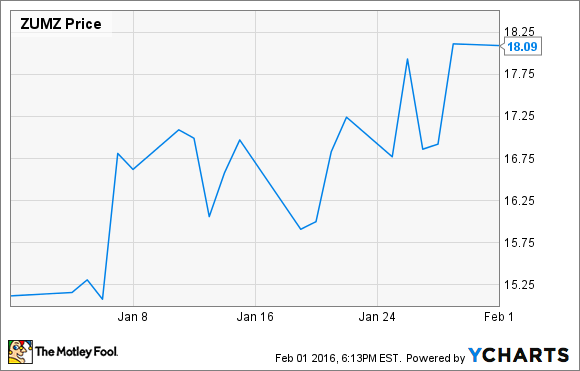 So what: Shares of the surf-and-skate retailer rocketed higher on January 7th, gaining 12% after the company reported a comparable sales decline of 8.9% during December, the key holiday selling month. Though a drop that steep would send most stocks plummeting, investors were actually expecting worse. Management also raised its top-and-bottom-line guidance, calling for EPS of $0.45-$0.47, up from a previous range of $0.40-$0.46.

There was little news on Zumiez through the rest of the month, but the stock added gains toward the end of January as the market recovered from the depths of the sell-off.

Now what: Zumiez shares seemed to have reached the point where the market had left it for dead. Same-store sales had fallen by double digits for several months straight as the company expanded too rapidly and struggled with mismanaged inventory and style selection, but it now appears to be emerging from the depths of that sales slide. The good news is that the retailer remained profitable even while sales declined, indicating the company is healthy enough to survive the setback. After the sell-off, shares trade at a reasonable P/E of 16 based on this year's projected earnings. If Zumiez can continue accelerating out of its recent sales slump and return to its former profit levels, shares should move even higher.