What: Shares of Calumet Specialty Products (NASDAQ:CLMT) went on a pretty wild ride in January, but by the end of the month they were down 19%. The largest culprit for the decline was contracting refining margins, but there was also news that it was keeping its distribution intact and that its new North Dakota refinery may not be panning out as the shale boom there goes bust.

So what: The largest headwind for Calumet in January was one that all refiners are dealing with right now: contracting refining margins. Margin indicators that track the price of refined products versus the price of crude are showing that so far in 2016, margins have declined considerably since this time last year. The crack spread in the Gulf Coast region -- the region where most of Calumet's refining capacity is located -- is about 30% lower than the same quarter last year. 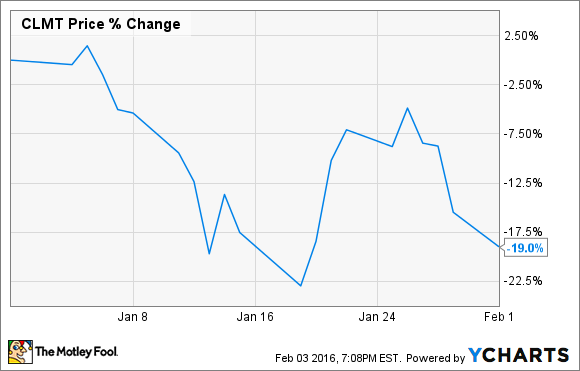 These margin indicators are slightly less indicative of Calumet's earnings than other refiners since it focuses more on non-fuel products than most other refiners, but it's still enough of a move to take into account if they stay this low throughout the quarter.

To make matters worse, a recent report from Bloomberg went into detail about how Calumet's newest refinery up in North Dakota is suffering a bit in its first few quarters of operations. Demand for diesel -- the primary product of the refinery -- in the Bakken region has been withering over the past year or so as oil and gas activity has declined significantly. Without large storage facilities on site, and with a lack of transportation infrastructure, the market here is drying up.

The one good piece of news that came out of the quarter was that management announced that it had maintained its distribution policy. Management believes now that it is finished with a large investment cycle that its cash flows will be able to support a distribution that was shaky for some time and is finally in better shape.

Now what: Calumet's business has been up in the air a bit recently, as it has been under the leadership of an interim CEO while searched for a new one. Now that newly installed CEO Timothy Go is in charge, investors should see how he plans to deal with the company's rather high debt load and still give some love to its investors. With a little uncertainty surrounding the future direction under a new CEO and an unfavorable refining market right now, it may be best to sit on the sidelines and see how this one plays out for a while.