Since hitting an all-time high of $133.27 in early December, shares of Netflix (NASDAQ:NFLX) have fallen violently, shedding more than 30% of their value. On Thursday, Netflix stock closed below the $90 mark for the first time since its stock split last July. 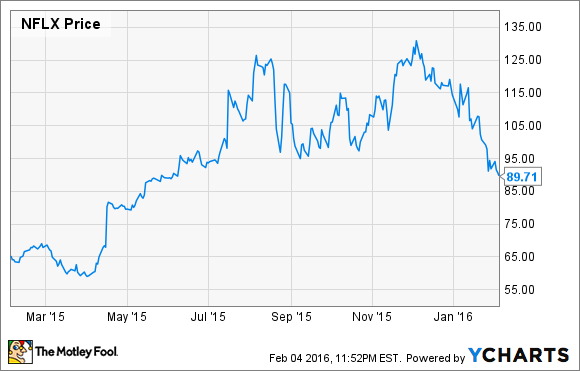 Netflix continues to post strong subscriber growth numbers, so the sharp decline in its share price could potentially be a good buying opportunity. That said, it's very hard to figure out what Netflix stock is worth, so the case for buying now is hardly a "slam dunk."

Netflix stock slips
After Netflix hit its all-time high in early December, some analysts began to worry that domestic subscriber growth would miss the company's target in Q4. (Ultimately, it did miss -- barely.) This helped take some of the shine off of the stock.

Neither Netflix's surprise announcement in early January that it had just turned on its service in 130 new countries across the globe nor the strong international subscriber growth it reported later in the month were able to stop the stock price slide for long.

It's impossible to know what's going on in investors' heads at any given moment. Nevertheless, the recent weakness in Netflix stock could indicate that many investors are ready to cash in their profits -- Netflix was the top performing stock in the S&P 500 last year.

Thus, Netflix is on a roll, to put it mildly. The company plans to drive further growth both in the U.S. and abroad by continuously improving its content offerings to attract new customers. In the case of overseas markets, Netflix will also gradually add support for new languages in order to appeal to non-English speakers.

Netflix ended 2015 with just shy of 75 million streaming subscribers. Given Netflix's undisputed leadership position in the market and its strong momentum, it seems very likely that the company will have hundreds of millions of subscribers globally in 10 to 15 years.

But the stock is expensive
Clearly, Netflix has a huge runway for growth. A decade from now, Netflix will probably be many times its current size. But before you run out and place a big order for Netflix stock, it's important to remember that a lot of growth is already built into the company's valuation.

For comparison, let's look at top media conglomerate Comcast (NASDAQ:CMCSA). In some ways, Comcast is similar to what Netflix wants to be, in that it is both a major content distributor as well as a content creator in its own right through the NBCUniversal division. (The parallel isn't perfect, as Comcast also gets a lot of revenue from providing Internet service.)

Comcast has an enviable operating margin of about 22% and is posting mid-single-digit revenue growth. These figures are in the general range that one might expect from a mature Netflix in, say, 2030. Based on this operating performance, Comcast stock trades for a little less than two times sales.

Let's suppose that by 2030, Netflix has 300 million subscribers paying an average of $200 per year: about double the current average revenue per user. That would put annual revenue at $60 billion, compared to less than $7 billion last year.

After all this assumed growth, if Netflix stock were to be valued at two times sales in 2030, its market cap would be $120 billion. That's more than three times its current market cap (taking into account the recent stock slump). Yet it implies a compound annual growth rate of just 8%-9%: roughly in line with the stock market's historical average.

How high is the ceiling?
So what does this all mean? As a long-term investor, to buy Netflix stock now, you need to believe that the company can ultimately attract more than 300 million users, or that it can get to that plateau significantly before 2030, or that annual revenue per user will ultimately be far higher than $200, or that its profit margin will be even higher than Comcast's in the long run.

Perhaps Netflix will be able to beat one or more of these targets, or perhaps it will be able to maintain a higher valuation than Comcast even after its business matures and growth slows. Based on the company's strong growth momentum, I wouldn't bet against Netflix.

However, I'm not inclined to invest in Netflix, either. Even after losing more than 30% of its value in the past two months, the stock is about 40% higher than it was a year ago. As a result, there is too big a risk that Netflix stock will underperform over the next 10 to 15 years even if the company successfully delivers on its growth potential.