Please ensure Javascript is enabled for purposes of website accessibility
Log In Help Join The Motley Fool
Free Article Join Over 1 Million Premium Members And Get More In-Depth Stock Guidance and Research
By Sean Williams – Feb 7, 2016 at 7:08AM

A midstage trial for Incyte came to a grinding halt in January, but the company may have a far bigger concern to contend with down the line. 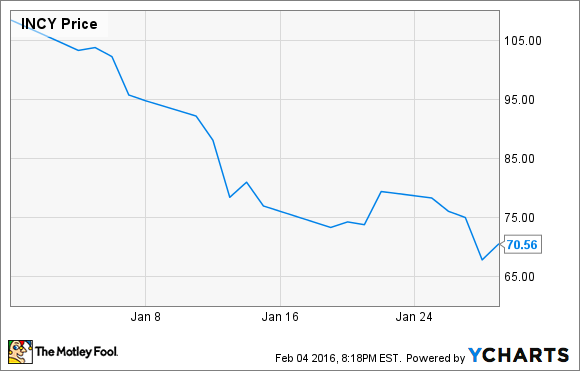 What: Shares of Incyte (INCY 3.17%), a drug developer primarily focused on the development of therapies to treat cancer, plummeted to the tune of 35% in January based on data from S&P Capital IQ. The culprits for the drop were overall market sentiment and a stopped midstage study.

So what: As a whole, the biotech industry was taken to the woodshed in January. The Nasdaq Biotechnology Index wound up plunging 21% as investors ran for cover from companies that are losing money and burning cash. Instead, investors sought the protection of dividend-paying, low-volatility names in the utility and consumer discretionary sectors. The result was biotech stocks were hammered, with Incyte no exception.

However, the fundamental reason behind Incyte's shellacking in January can be traced to a press release after the closing bell on Jan. 27. The announcement was designed to inform shareholders that the combination of ruxolitinib (known commercially as Jakafi) and regorafenib (known commercial as Stivarga) was not performing to expectations in a midstage trial for patients with metastatic colorectal cancer and high C-reactive protein. A planned interim analysis of the phase 2 study showed that the combo was unlikely to meet the required efficacy to warrant completing the trial.

The concern here is that Incyte's only approved product, Jakafi, a JAK1/JAK2 inhibitor, is being tested in multiple other cancer types, including a pivotal pancreatic cancer study, as well as proof-of-concept trials in breast cancer and lung cancer. The failure of Jakafi to deliver meaningful efficacy in phase 2 studies certainly could cloud its future in cancer treatment beyond myelofibrosis and polycythemia vera, its two approved indications.

Now what: Personally, I believe there are far bigger worries for Incyte than just its shelved metastatic colorectal cancer combo study. It has Geron (GERN 1.92%) nipping at its heels with imetelstat, and it's possible Incyte could surrender its myelofibrosis revenue to imetelstat in due time.

Geron, which has found a development partner in Johnson & Johnson (JNJ -0.11%), has demonstrated immense success with imetelstat in early stage trials in myelofibrosis. Jakafi, the only approved treatment for MF, doesn't generate partial or complete responses. In trials its task was merely to lessen symptoms associated with the disease, such as anemia and enlarged spleen. Imetelstat actually generated partial and complete responses for MF patients, which is something we've never seen before. This data is why Johnson & Johnson was more than willing to give Geron $35 million up-front in 2014 and dangle $900 million in additional milestones on the vine for Geron.

Incyte does have a very extensive list of immunotherapies and proof-of-concept therapies in development beyond Jakafi, as well as bacritinib as an experimental co-developed therapy for rheumatoid arthritis in later-stage studies, so it's not as if all hope is lost. However, Incyte's primary revenue stream could be in jeopardy within a few years. Until we see some meaningful advancement in Incyte's development portfolio, I'm inclined to suggest investors keep to the sidelines.