Please ensure Javascript is enabled for purposes of website accessibility
Log In Help Join The Motley Fool
Free Article Join Over 1 Million Premium Members And Get More In-Depth Stock Guidance and Research
By Brian Feroldi - Feb 7, 2016 at 6:19AM

From integration updates to margin details, here are the key areas that investors should pay attention to. 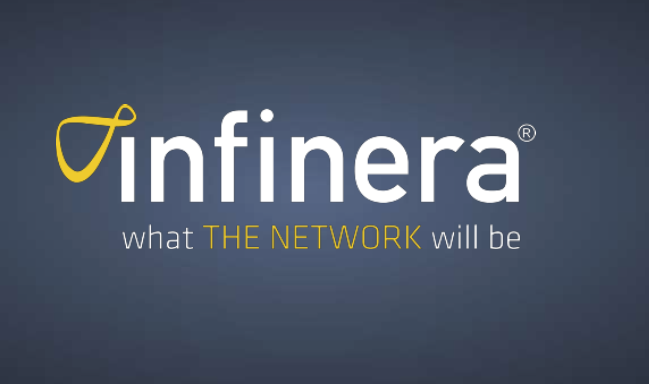 It's been a rough couple of months to be an investor in Infinera (INFN 1.31%), as the optical network equipment maker's shares are down more than 38% from their summertime highs. Seeing shares decline so much is a bit puzzling as the business continues to fire on all cylinders -- it has released five consecutive quarters of better-than-expected results. Its third-quarter results released in October were especially strong, as revenue grew by more than 33% when compared to the year-ago period, and net income and earnings per share both grew significantly faster.

With shares down so much, you can bet that its management team is anxious to prove that its business strategy continues to play out according to plan. Here are a few key areas that investors should be watching when the company reports results Feb. 11.

The headline numbers
Revenue growth at Infinera has been explosive since the company introduced its DTN-X for 100G long-haul product in 2012, as it has consistently stolen a meaningful amount of market share over that time period. In fact, revenue growth at Infinera has been more than triple the rate of Ciena's (CIEN -0.13%), the second-fastest grower in the space, since the summer of 2012.

On its last earnings call, Infinera's management team predicted that its torrid growth rate would continue into the fourth quarter and forecast that revenue would land at $258 million, plus or minus $5 million. That $258 million would represent growth of nearly 39% when compared to the $186 million it produced in the same quarter last year. That's also significantly larger than the 9% or so growth that Ciena is forecasting for the same period, which indicates that Infinera's management is confident that it will continue to gobble up market share.

Infinera is also looking for strong growth in its bottom line, as it forecast non-GAAP earnings per share of $0.21 per diluted share, plus or minus a couple of pennies. The midpoint of that range represents 62% growth from the $0.13 that if reported in the year-ago period.

Integration updates
Infinera made a big bet on continued growth in its industry when it shelled out $350 million to acquire Transmode in 2015. Transmode is a Swedish company that is a leader in metro packet-optical networking and the acquisition promised to enable Infinera to significantly enhance its product portfolio.

On its last earnings call, Infinera CEO Thomas Fallon gave investors a sneak peek at what the company had accomplished since the acquisition:

Only a few weeks after the acquisition closed, we are already seeing early tangible benefits from Transmode. Our recently announced deal with Hanoi Telecom was notable, marking the first customer, where we sold Transmode's portfolio into an existing Infinera customer. Furthermore, I'm encouraged that we have already been invited to bid on opportunities that would not have been available to us without an end-to-end solution from long haul to metro access.

The deal looks like it got off to a great start, but since acquisitions are notoriously difficult to integrate, investors should listen in for clues to see if the combined company is able to deliver on its promises.

Margins, margins, margins
Infinera has done a great job in recent years of turning its fast revenue growth into even faster profit growth thanks to its scalable business model. 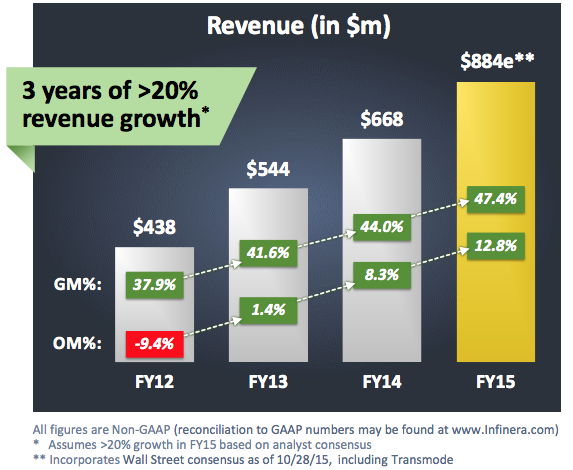 Last quarter, the company was able to show continued gains as its non-GAAP gross margin came in at 47.1%, which was higher than the company had previously guided for. Management credited the beat to the Transmode acquisition as that business produced a non-GAAP gross margin of 52.1% in the quarter, which was higher than its legacy business. Over the long term, management believes that it should be able to show a companywide gross margin of 50% and an operating margin of 15%.

Investors will want to watch the upcoming earnings report to see how things are playing out.