What: With the major stock indexes tumbling on Monday, technology stocks were hit particularly hard, with the NASDAQ down more than 3% at 3 p.m. ET. Many of the same tech stocks that slumped on Friday slumped again, driven by no company-specific news. Here's a rundown of a few cloud companies that saw big declines:

So what: The biggest driver of these stock price declines is the volatility of the stock market. Since the start of 2016, the tech-heavy NASDAQ is down about 15%, and many stocks that traded at lofty valuations in 2015 have been hit extremely hard. Shares of NetSuite, Splunk, Zendesk, and Rackspace have all been decimated this year, falling far more than the NASDAQ. 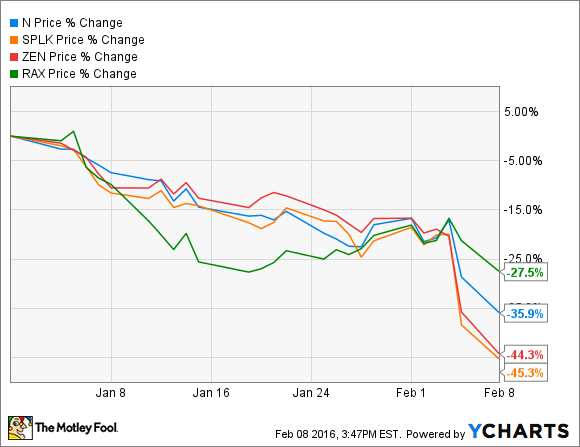 For the most part, these declines were not driven by company-specific news. Rackspace may be the exception; both Amazon and Microsoft cut prices on their public cloud offerings in January, and concerns that the smaller Rackspace can't compete have played a role in the stock's poor performance.

For NetSuite, Splunk, and Zendesk, all cloud-based enterprise software vendors, weak guidance from similar companies has added fuel to the fire. Tableau Software saw its stock cut in half on Friday after the company provided disappointing guidance, while LinkedIn suffered a similar fate after its guidance called for slowing growth. These results trigged a massive sell-off in many fast-growing enterprise software companies, and that sell-off continued on Monday.

NetSuite, Splunk, and Zendesk are all growing fast, but with peers providing weak guidance, investors are clearly concerned that growth at all three companies is set to slow. All three continue to post GAAP losses, meaning that the stock prices are based solely on revenue growth. If growth comes up short, the stocks could fall further.

Now what: Despite the stock market's reaction, NetSuite, Splunk, and Zendesk will likely continue to grow rapidly. The pace of growth may be a bit short of expectations, but double-digit revenue growth is impressive nonetheless. NetSuite guided for 28% to 31% revenue growth in 2016, while Zendesk and Splunk expect to report year-over-year growth of 54% and 37% during the fourth quarter, respectively.

Up until now, the market hasn't cared about profitability when it came to fast-growing cloud software companies. That may be changing, or these steep declines may simply be an overreaction, driven by fear and a broad decline in the stock market as a whole. The long-term growth potential for NetSuite, Splunk, and Zendesk hasn't changed, and while it can be difficult to stomach these kinds of declines, investors who believe in the growth stories of these companies shouldn't sell simply because everyone else seems to be doing so. Panic is not a viable investing strategy.