Please ensure Javascript is enabled for purposes of website accessibility
Log In Help Join The Motley Fool
Free Article Join Over 1 Million Premium Members And Get More In-Depth Stock Guidance and Research
By Lee Samaha - Feb 8, 2016 at 8:20AM

The manufacturing sector faces a difficult start to 2016, but companies with secular growth prospects like Cognex Corporation (CGNX 0.20%) have the capability to buck the trend. Its machine vision solutions are a facet of the increasing usage of industrial automation and robotics in manufacturing. That said, the company faces an uncertain 2016. Let's take a look at what to expect from its upcoming results on Feb. 10. 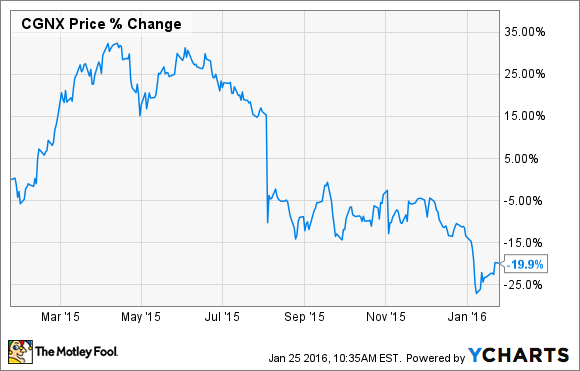 Numbers to look for
It's no secret that the industrial sector experienced a broad slowdown in the last three months, so the company's fourth-quarter results could come under pressure. Here's management's guidance for the fourth quarter:

The revenue forecast is below the adjusted (for the sale of its surface inspection business) revenue of $98.5 million, so managing expenses and margin will be important -- something to look out for.

Guidance and commentary
While optimism for the fourth-quarter numbers is muted due to the sluggish industrial economy, the company has upside potential from signing new deals, particularly with its fast growing ID products business. The story of 2015 was of a company gearing up for growth in large orders in the second half. Unfortunately, it didn't occur and management downgraded expectations in the summer (the results of which can be seen in the stock price chart above).

On the other hand, Cognex still has prospects for order growth in 2016. They come from three main sources:

Apple was responsible for 14% of revenue in 2014, and any extension of the relationship is likely to have a significant impact on Cognex's prospects. In other words, all Cognex needs is one or two significant deals with existing major customers and the stock has upside potential.

... [S]ome of which included delays in product roadmaps, perhaps due to changes in company strategy or due to the availability of engineering resources and other priorities. And in other cases, I think, we saw our customers trying to cut their spending, based on the environment.

Not all of the reasons cited were economic, so don't be surprised if some of the delayed deals get signed.

Turning to new deals, many companies are under pressure to increase automation in activities such as warehousing and transportation, largely due to growing e-commerce demand. Also, increasing automation in consumer electronics manufacturing can help to cut costs -- not a bad thing in a slowdown. Addtionally, the automotive industry is a core revenue generator for Cognex, and car sales in China and the U.S. recorded double-digit gains at the end of 2015.

What to expect
The industrial economy slowed in the last quarter. Moreover, in the last earnings call Cognex management sounded a cautious tone on the fourth quarter amid discussing a weakening of the automotive sphere and Asia-based demand in the third quarter. In addition, U.S. manufacturers' spending with Cognex had already been weak throughout 2015.

On the other hand, Cognex still has growth prospects in 2016, and signing a large deal or two will quickly turn sentiment around on the stock. Ultimately, it's hard to know what Cognex will say in terms of commentary on deal prospects, and I suspect the only reliable assumption for the market's reception to its earnings report will be to expect some volatility.