The toy and game maker breezed by revenue and earnings expectations, thanks to robust sales across its partner brands and in several of its franchise brands, including iconic favorites Nerf and Play-Doh.

Hasbro (HAS -1.03%) reported fourth-quarter and full-year 2015 earnings before the market opened Monday. On the heels of the holiday season release of Disney's (DIS -1.70%) Star Wars: The Force Awakens, the toy and game company posted robust revenue and earnings growth on a constant-currency basis.

Hasbro stock was up over 1% as of midday trading. Going into earnings, the stock logged a one-year total return of more than 34%, walloping the 6% loss of the S&P 500 over that same period. Rival Mattel(MAT -1.86%)has returned 21% for the one-year period, with the bulk of that gain coming after the company reported better-than-expected earnings last week. Part of this rise, however, can be attributed to news last week that Hasbro and Mattel have recently held merger talks.

Hasbro soundly monopolizes the long-term game, however, with its 10-year total return of 376%, far outpacing the 190% and 84% gains of Mattel and the broad market, respectively.

Hasbro generated 47% of its fourth quarter revenue in international markets. As a result, foreign exchange headwinds continued to weigh on results due to the continued strength of the U.S. dollar against other currencies. Excluding currency effects, revenue in the quarter jumped 23% year-over-year, while revenue for 2015 increased 13% overall.

Operating profit expanded 16% in the quarter, or 29% on a constant-currency basis.

Long-term investors shouldn't get too hung up on analysts' estimates, as Wall Street is notoriously short-term focused. That said, it's worth noting that quarterly revenue of $1.47 billion soundly beat expectations of $1.37 billion, and adjusted earnings per share of $1.39 also comfortably surpassed the consensus of $1.30.

It's not surprising that Hasbro, which holds a license from Disney to produce Star Wars-themed toys, had a better-than-expected quarter. Star Wars toys flew off retailers' shelves over the holiday season due to the excitement surrounding the theatrical release of the film in mid-December. Movie-based toys were among the best-selling items on Black Friday and Cyber Monday, according to retailers and industry trackers.

The Force Awakens continues to shatter countless box office records. In just 20 days after its release, it captured the crown for the highest grossing film of all-time (excluding inflation) at the domestic box office, surpassing Avatar and its $760.5 million tally. On Feb. 5, the film surpassed the $900 million mark in the U.S. -- the first ever to do so -- and a day later, it crossed the $2 billion mark worldwide, making it only one of three films to achieve such success, according to Box Office Mojo.

Boys and preschool categories continue to power results
Growth in the boys category led the quarter with revenue rocketing 35%. That's largely because Hasbro includes all Star Wars toy sales in its this category. 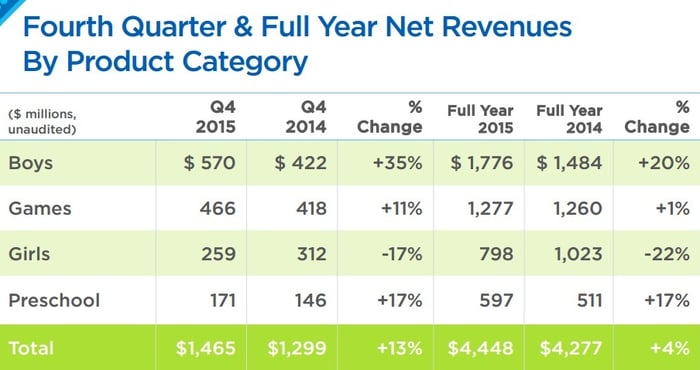 Along with Star Wars toys, the boys category was also helped during the quarter by revenue growth in the franchise brand Nerf and partner brand Jurassic World. Universal's Jurassic World, released last summer in North America, was also one of biggest blockbusters of all time.

For the quarter, Hasbro's franchise brands experienced a revenue contraction of 3%, though revenue increased 6% on a constant-currency basis. In addition to Nerf, Play-Doh (preschool) and Magic: The Gathering (girls) also expanded during the period.

Investors get a dividend hike
As part of its earnings announcement, Hasbro said it will increase its quarterly dividend for 2016 by 11%, or $0.05 per share, to $0.51. The company has raised its dividend in 12 of the last 13 years.

Looking ahead
Hasbro didn't release forward guidance with its earnings, though management will likely cover that topic in its conference call. The company has done a solid job leveraging its iconic brands and executing its strategy in 2015, and there's no reason to believe that won't continue into 2016.

Investors will see an entirely new -- and what should prove a robust -- revenue and earnings source kick in when Hasbro reports its first quarter 2016 results. On Jan. 1, the global rights to develop dolls based on Disney Princess characters and the immensely popular Frozen transitioned from Mattel to Hasbro. Mattel's gross sales for this line in 2015 were about $450 million, which represents 10% of Hasbro's 2015 revenue.

Star Wars mania is far from over as two more films to complete the trilogy that began with The Force Awakens are scheduled to be released in December 2017 and some time in 2019. Two spin-offs are also slated to hit the silver screen within the next few years: the first, Rogue One, is scheduled to debut in December 2016.