What: Shares of Kayne Anderson MLP Investment (NYSE:KYN) were down by more than 11% at 12:45 p.m. ET on Monday. Driving today's weakness was a steep slide in the company's top holdings.

So what: Kayne Anderson MLP Investment is a closed-end fund that invests in MLPs, so its performance is directly tied to those of the companies in which it has invested, with its top 10 detailed on the chart below:

All 10 of these holdings are down today, with two of its top three holdings having a particularly rough day: 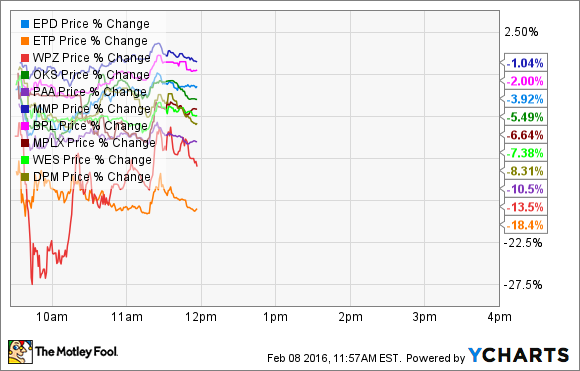 There are a couple of factors weighing on MLPs today. First, the price of oil is down, which is putting pressure on the entire energy sector. In addition to that, the CFO at the parent company of its second largest holding has been replaced, which is affecting both companies. Furthermore, that news is weighing on Kayne Anderson MLP's third-largest holding because its parent company is in the process of being acquired by the company replacing its CFO.

Needless to say, that news is making a mess of things for not only those companies but for Kayne Anderson MLP because a large percentage of its portfolio is invested in that group. And, if that wasn't enough bad news for one day, another top 10 holding was downgraded by an analyst today, which sent that company's units lower.

Now what: The MLPs owned by Kayne Anderson MLP have been harder hit by the energy market downturn than had been expected, which is putting a lot of downward pressure on valuations. That pressure is then amplified whenever negative news hits the wires, which has a big impact on Kayne Anderson's stock. While Kayne Anderson MLP's overall diversification does help to lessen the blow when there's negativity, it's certainly not immune to days like today.