Through all of that news the Dow Jones Industrial Average (DJINDICES: ^DJI) and the S&P 500 (SNPINDEX: ^GSPC) added to their losses for the year, losing 1.7% and 3.1%, respectively. 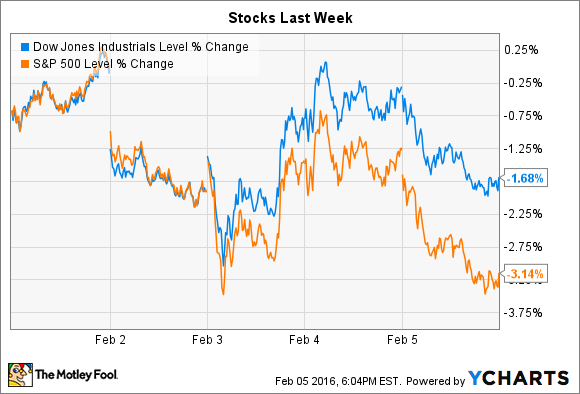 The week ahead promises to be just as packed with news for investors. Several of the market's biggest stocks, including Disney (NYSE:DIS), Twitter (NYSE:TWTR) and Activision Blizzard (NASDAQ:ATVI), are due to post quarterly earnings reports over the next few days.

After the market closes on Tuesday, Disney is expected to reveal solidly higher quarterly sales and profits. Revenue should rise 10% to $15 billion as earnings jump 14% to $1.45 per share, according to consensus estimates. Yet the stock is down 16% since the entertainment giant's last quarterly check-in – and 22% lower over the past six months.

Investors worry that Disney's media empire, anchored by network properties ESPN and ABC, will continue to struggle as more TV viewing moves online. After all, the media segment was its worst performer last year, detracting from strong growth in the movie, theme park, and consumer product divisions.

Yet cable companies are posting their best customer growth figures in almost a decade, which suggests Disney may see some relief in ESPN subscriber defections that could power a brighter business outlook from management this week.

Wednesday, Feb. 10 – Twitter looks for users
Twitter's stock is down 50% in the last year as its user growth slowed to a crawl in recent quarters. In Q3 the social-networking giant's base of active users ticked higher by just 1% to 307 million .

The company still enjoyed a 58% spike in revenue that quarter, and expectations are for more solid sales growth in Q4. Consensus estimates call for revenue to jump by 48% to $710 million.

But Twitter's results are likely to pale in comparison to the blockbuster numbers that rival Facebook (NASDAQ:FB) posted last week, led by a sharp increase in average revenue per user in each of its geographic markets. Facebook's 1 billion daily active users continued to increase their time spent on the service.

Similarly, Twitter will need to show that its user base is growing both in size and in engagement for the stock to earn a higher premium that's on par with Facebook's.

Beyond the headline numbers, look for Activision to demonstrate progress at deepening its portfolio from the 3 tent pole franchises, Call of Duty, World of Warcraft, and Sklyanders, that accounted for nearly all of its profit as recently as 2014. In contrast, the company likely ended 2015 with 10 triple-A brands including new additions Destiny and Hearthstone.

Staying on top of the video game sales charts this year won't be easy, and rivals from EA to Disney will take every chance they can get to knock Call of Duty and Sklylanders off of their No. 1 spots. But as the installed base of this generation of game consoles grows, and as digital sales push profits higher, Activision has a good shot at a record operating year ahead for 2016.