Please ensure Javascript is enabled for purposes of website accessibility
Log In Help Join The Motley Fool
Free Article Join Over 1 Million Premium Members And Get More In-Depth Stock Guidance and Research
By Anders Bylund - Feb 8, 2016 at 8:41AM

A fellow business software specialist dragged down the entire sector of Friday. Investors will have better data on Blackbaud itself in just a few days. 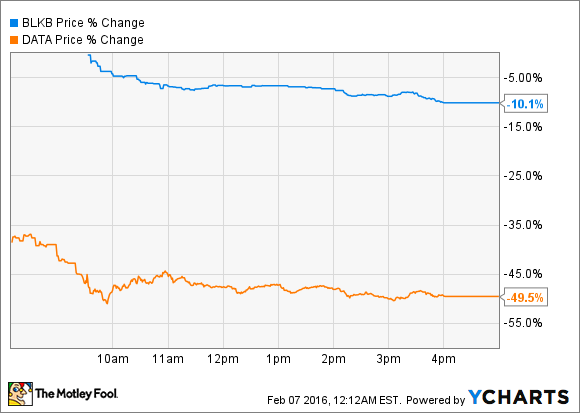 What: Shares of Blackbaud (BLKB -1.02%) fell all day long on Friday, closing the day at a session-low 10.1% loss. The maker of software tools for running non-profit, charity, and educational operations had absolutely no news of its own this time. The stock simply caught a wave of negativity across the business software sector, which started with Thursday night's Q4 results from data analysis expert Tableau Software (DATA)., which reduced its next-year revenue forecast by about 2%. The market reaction was brutal, as its shares quickly dropped by almost 50% and stayed there all Friday long.

So what: Blackbaud has two important attributes in common with DATA, exposing it to a sympathy swing alongside its distant sector cousin. First, both companies make software tools designed to let other organizations do their own jobs better. Second, both are richly valued in traditional terms -- Tableau has no trailing income to speak of, and Blackbaud still trades at 103 times trailing earnings even after Friday's rout.

Now what: Blackbaud investors should not let news from a largely unrelated business drive their investment decisions. Blackbaud will report its own fourth-quarter results on Tuesday night. Digging into that report will yield far more useful data for Blackbaud investors than a mountain of results from another company ever could provide.

That being said, no business operates in a complete vacuum. Tableau did mention "some softness in spending, especially in North America." Given that a staggering 84% of Blackbaud's revenues came from its North American operations last year, widespread spending weakness in that crucial market would be a problem.

So it remains to be seen whether DATA's issues are an indication of a sectorwide trend -- or simply that company's own problem. We'll know more on Tuesday night.

Why Blackbaud Stock Is Falling Today