Please ensure Javascript is enabled for purposes of website accessibility
Log In Help Join The Motley Fool
Free Article Join Over 1 Million Premium Members And Get More In-Depth Stock Guidance and Research
By Daniel B. Kline - Feb 8, 2016 at 9:30AM

The company had some performance issues that the market was able to see well before it reported results.

After opening at $32 on Jan. 4. the struggling entertainment company closed the month at $26.15, a drop of just over 18%, according to according to S&P Capital IQ data. It then plunged further in early February. 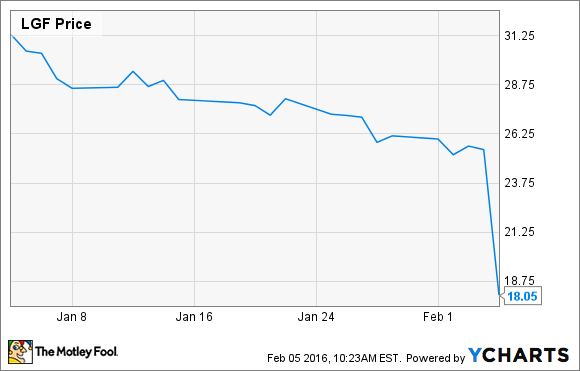 Lions Gate stock fell all through January and then plummeted when the company reported earnings on Feb. 4. Source: YCharts.com

What: It's not that the company released any huge flops; it was partly that the hit film it put out wasn't quite as big a hit as its predecessor, while it cost more to make and market. The company explained the problem in its Feb. 4 earnings release:

"Although The Hunger Games: Mockingjay 2 grossed over $650 million at the global box office, ranking it among the highest-grossing films of the year, its box office performance declined from Mockingjay, 1 with higher Mockingjay 2 production costs also impacting its profitability."

For the quarter, the company's motion picture segment revenue was $505.8 million, down from $590.1 million in the prior-year quarter. Theatrical revenue -- the money returned from films playing in theaters -- was $183.1 million, comparable to $186.4 million in the prior-year quarter. But those numbers are a bit deceiving, as the company had higher expenses because it had four wide releases in the same period last year, as opposed to two the previous year.

Of course, those figures weren't released until February, but because box office results are widely reported, Lions Gate stock fell in January in advance of the earnings report. The market already knew numbers weren't going to be good, and the steady stock decline in January reflected that.

So what: All Lions Gate revenues trace back to how films perform at the box office. If its movies aren't hits when they're released, that affects their earning ability down the line. Failed movies sell fewer DVDs, get rented less, and are worth less during their post-release streaming run.

Now what: Lions Gate CEO Jon Feltheimer acknowledged the poor film results in his statement in the earnings release, while also laying out his reasons the company's fortunes would improve going forward.

"While the performance of our theatrical film slate resulted in softer than anticipated results, our other businesses performed strongly in the quarter," he said. "With our television business continuing its robust top-line and margin growth, a deeper and more diversified film slate with lower costs and contributions anticipated from recently launched businesses, we have a clear path to resume our strong and sustainable financial trajectory in fiscal 2017."

In addition the company has also disclosed that it's once again pursuing a merger deal with Starz. That agreement would greatly change the company's fortunes because of the strong distribution channel the pay network would offer.