What: Shares of the biotech company Heron Therapeutics (NASDAQ:HRTX) sank by as much as 15.8% today on greater-than-normal volume for the stock. The good news is that this latest downturn wasn't triggered by a negative catalyst; rather, the stock appears to be caught in the broader sell-off occurring across the entire biotech industry at the moment.

So what: Heron's shares are now down a staggering 59% from their 52-week highs, according to S&P Global Market Intelligence: 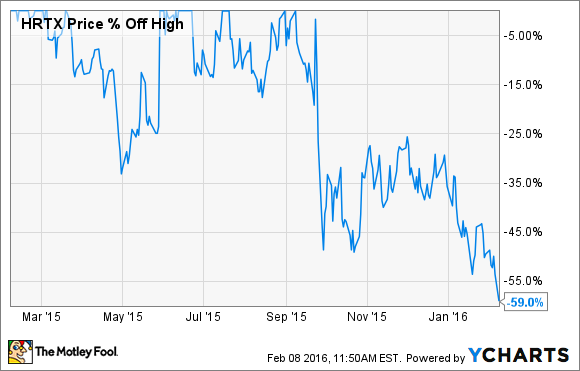 Even so, Heron has actually made major strides toward building out a profitable product portfolio over the past year -- headlined by the experimental chemotherapy-induced nausea drug, Sustol, that is currently under regulatory review with the U.S. Food and Drug Administration.

Now what: Last month, the FDA notified Heron that it had not yet completed its review of Sustol, pushing the drug's regulatory decision into late February. Unfortunately, this regulatory delay has only served to accelerate the stock's move lower, with Heron's shares shedding a hefty 25% of their value since Jan. 15 when the announcement hit the Street.

On the flip side, most of the analysts covering this stock have remained extremely bullish, despite the FDA's tardiness on Sustol's regulatory decision. For example, Heron's average 12-month price target presently sits at $50.63, implying that shares could essentially triple from current levels.

While that's certainly an impressive amount of upside potential, I'm personally willing to wait on the FDA's decision before buying shares. After all, this keystone event isn't a slam dunk by any means, as evidenced by Sustol's prior regulatory reviews .