What: Radius Health (NASDAQ:RDUS), a biopharmaceutical company focused on developing products that treat osteoporosis and other endocrine-mediated diseases, had a rough January. The company's shares lost 45% of their value during the month, according to data from S&P Capital IQ. 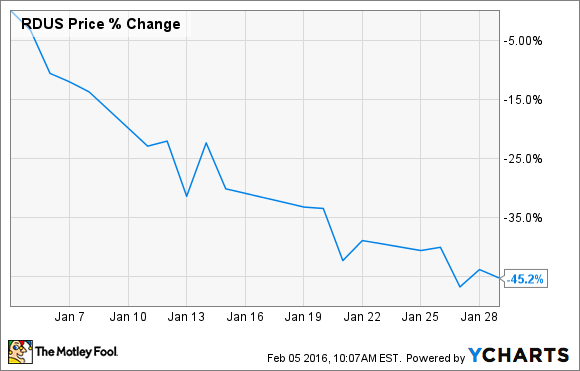 So what: Despite the huge share price swoon, Radius actually had some good news to share with investors during the month. Two news items, in particular, are worth highlighting:

Now what: Investors who are bullish on abaloparatide SC's market potential should do their best to ignore the stock's seemingly arbitrary huge price drop and focus on Radius Health's long-term potential. It's estimated that two million osteoporosis-related bone fractures happen each year in the U.S. alone, which is a huge market opportunity. Mixing in the news about its new collaboration deal with Novartis should only add additional upside potential to the company's future, so investors with a strong stomach for risk might want to give this name a closer look.