Following an 11% tumble in January, can you trust Valeant, which appears to be trading at a bargain-basement price? 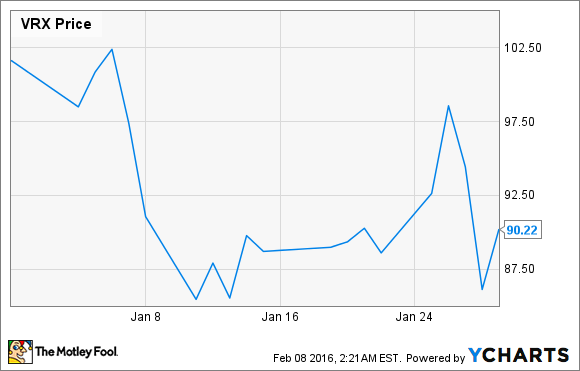 What: Shares of Valeant Pharmaceuticals (BHC 4.49%), a developer and marketer of pharmaceuticals, medical devices, and over-the-counter products throughout the world, tumbled 11% in January, based on data from S&P Global Market Intelligence. There were three primary catalysts behind the move lower.

So what: Putting aside the fact that all drug developers were creamed in January and the stock market got off to its worst start ever, allegations of unfair pricing practices with some of its drugs have been the biggest issue for Valeant. Presidential hopeful Hillary Clinton has been hitting the company's pricing practices particularly hard for months, calling for prescription drug reforms. These reforms would allow Medicare to harness the federal government's might to negotiate with drug companies, as well as cap out-of-pocket spending for consumers on a monthly basis. If there's one company Congress has focused on most recently, it's Valeant -- and that's not the spotlight it wants to be in.

Second, prominent institutional investors are heading for the exit. At the very tail-end of December, we learned that Pershing Squares' Bill Ackman had sold a substantial portion of his stake in Valeant after its business model, which primarily involves buying other companies, had come under fire. With Ackman pushing away in late December, other investors have followed suit. However, it should be noted that some of the justification for Ackman's sale was to take a purposeful tax loss before the end of 2015, and Pershing did up its stake once again according to Dow Jones.

Finally, Valeant isn't sure when J. Michael Pearson will be able to return to his CEO duties after a bad bout of pneumonia. Without Pearson at the helm and the company facing rigorous questions from regulators, Wall Street and investors are clearly worried about its near-term potential.

Now what: The two important questions here are whether (1) prescription drug reform will actually occur, and (2) Valeant can continue to be successful with its business model of acquisitions and price hikes.

As to the first point, I personally don't believe we'll see any substantive reforms in the near future from Congress. It's possible Valeant could find itself in hot water for its acquisition and pricing practices, but it may also be cleared of all allegations. This is a cloud that's likely to hang over Valeant throughout the entirety of the 2016 election season.

The answer to the second question is that, yes, I do believe the model works. However, its success will be somewhat dependent on the outcome of question one. If Valeant is found to have unfairly priced some of its medicines, then it could face even tougher scrutiny, likely clamping down its growth rate even more. If, however, the allegations against Valeant's pricing practices have no merit, then Valeant could prove to be an incredible bargain. Wall Street's consensus for 2018 is north of $18 in EPS.

My suggestion: If you're a risk-taking value investor (I know, that seems like an oxymoron), then Valeant may be worth nibbling on. Otherwise, I'd patiently wait for more clarity on its pricing practices and the condition of its CEO before considering a position.