Weakening prices for its portfolio investments led to a net loss for the calendar fourth quarter.

Apollo Investment Corporation (AINV 0.59%) can't seem to catch a break. The company reported yet another quarter of losses from its energy-heavy investment book, despite its efforts to use fee waivers to stay friendly with its shareholders.

While operating earnings of $0.21 per share covered its $0.20 quarterly dividend, the company's bottom line, which includes the impact of capital gains and losses, failed to do so.

In the short run, operating income is a suitable measure for dividend sustainability from quarter to quarter, but in the long run, a company's all-encompassing net income figure is what drives performance and the ability to make outsized distributions to shareholders.

As its investments are affected by falling loan prices and weakening credit conditions in its energy portfolio, Apollo Investment's book value has now dropped six quarters in a row. 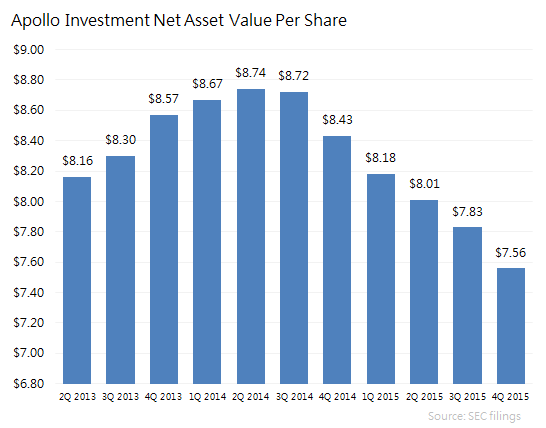 What happened this quarter?
Relatively "boring" by nature, financial companies tend not to change much from quarter to quarter. There were, however, a few notable events:

What management had to say
CEO James Zelter commented that "NAV per share declined during the quarter due to the dislocation in the credit markets which resulted in spread widening, as well as from low and falling oil prices."

On the call, one executive also provided some helpful hints about the company's capital allocation plans, noting that the company places "leverage a little bit higher than our stock," suggesting that the pace of buybacks could slow as the company manages its balance sheet.

Notably, Apollo Investment's balance sheet leverage stood at 0.8 times debt to equity, which is relatively high given a legal requirement to keep leverage at less than 1 debt to equity, and the ratings agencies' view that 0.85 times is a soft limit for maintaining an investment-grade credit rating.

Looking ahead
This year will be one of portfolio management. Of its four non-accrual investments, consider that only one (Gryphon Colleges) is not an energy- or commodity-related company. Working through the company's troubled commodity-exposed investments will remain a top priority as Apollo Investment enters calendar year 2016.

Jordan Wathen has no position in any stocks mentioned. The Motley Fool recommends Apollo Investment. Try any of our Foolish newsletter services free for 30 days. We Fools may not all hold the same opinions, but we all believe that considering a diverse range of insights makes us better investors. The Motley Fool has a disclosure policy.