Investors will home in on these critical metrics when Tesla reports results on Wednesday.

Ahead of electric-car maker Tesla Motors' (TSLA -5.00%) fourth-quarter results on Wednesday, it's clear the market fears the update could signal headwinds for the company. Shares are down 36% during the last three months, declining much more sharply than the S&P 500's 12% decline during this period. Investors are likely nervous about a few metrics, each of which could send shares lower or higher depending on what the company reports. Here's a preview of the metrics that are most likely to drive sentiment toward the stock this week. 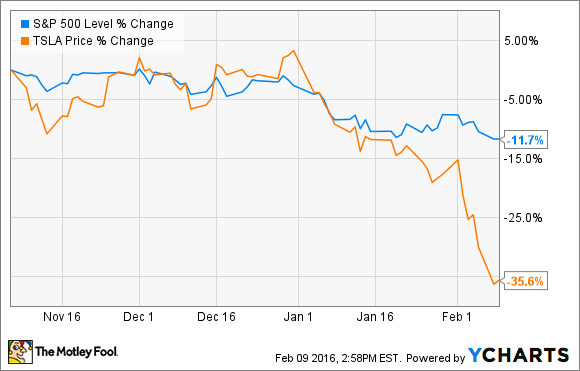 Earnings per share
Tesla's profitability will likely be a critical point of focus on Wednesday, particularly in light of the overall sell-off of unprofitable growth stocks recently. During the company's most recent quarter, GAAP EPS was a loss of $1.78 per share and non-GAAP EPS was a loss of $0.58. Given the company's 50% sequential increase in deliveries between Q3 and Q4, investors should expect some operating leverage to benefit Tesla's EPS on both a GAAP and non-GAAP basis.

Investors should at least expect the company to be profitable on a non-GAAP basis -- anywhere between breakeven and $0.20 per share. Analysts, on average, are expecting the company to report non-GAAP EPS of $0.10.

On a GAAP basis, investors should expect an improvement as well, with losses per share improving to a $1.50 loss or better, up from Tesla's $1.78 loss in Q3.

Notably, the company's rapid ramp in production, paired with the first few hundred deliveries of Model X during the quarter, could bring with it some unexpected levels of expenses; so it's very difficult to forecast the quarter's overall profitability. Though management did explicitly note in Tesla's most recent shareholder letter that it expected operating leverage to improve during the next several quarters.

Guidance for vehicle deliveries
Investors will undoubtedly hone in on Tesla's guidance for full-year deliveries. With management recently noting the company was confident it could achieve average weekly production and deliveries during 2016 of 1,600 to 1,800 Model S and X vehicles combined during the year, it would be reasonable to expect the company to guide for around 80,000 deliveries for the year -- at least if Tesla were to maintain this outlook for production and deliveries. Guidance for 80,000 deliveries during 2016 would represent 58% year-over-year growth -- about in line with the company's 60% growth in 2015.

Whatever the company reports, there's really no way to predict which direction the stock will go on Wednesday. The market is unpredictable. But this background on these three metrics could serve as benchmarks for these important metrics when investors attempt to check in on where the company is at on its growth plans.