Please ensure Javascript is enabled for purposes of website accessibility
Log In Help Join The Motley Fool
Free Article Join Over 1 Million Premium Members And Get More In-Depth Stock Guidance and Research
By Daniel B. Kline - Feb 9, 2016 at 9:00AM

The biggest companies in the world are on the list, and they're spending to win influence on a number of issues.

Sometimes new technology creates legal confusion. If something hasn't existed before or it works in an entirely different way than other products that tackle the same problem, the law may simply not know how to handle it.

In some cases that leads to utter chaos and after-the-fact legislation. For example, during the 2015 holiday season the emergence of so-called hoverboards left many unsettled legal questions. Could they be used on city streets? Can you bring them on planes? Do you need a license to ride them? Those, and other issues, have different answers depending where you are, but the bigger tech companies either don't or can't handle these issues after the fact.

The major technology companies -- the ones pushing the boundaries in areas such as how we travel, how packages are delivered, and how we interact with the world -- don't leave these matters to sort themselves out. Perhaps that's because things such as driverless cars from Alphabet's (GOOG -2.27%) (GOOGL -2.46%) and Amazon.com's (AMZN -2.86%) delivery drones generate too much attention for their creators to take a let-the-law-sort-it-out-later approach.

So a number of tech companies, including Alphabet, Amazon, Facebook (META -3.84%), Microsoft (MSFT -1.39%), Apple (AAPL -1.51%), Netflix (NFLX -1.64%), and others spend big money on lobbying. Those expenditures must be disclosed, and the federal government maintains a database of the forms each company must file on a quarterly basis.

Of course, these are government forms, so they're not all the easy to decipher, but if you do some digging, you can ferret out not only how much each company spends, but also which men and women in Congress they have spent it to curry favor with, and more interestingly what issues they are lobbying for.

How much are company's spending?
It's probably not surprising that what until recently was known as Google, but is now part of Alphabet, led the way in 2015, spending $16.66 million in 2015, according to numbers compiled from the aforementioned database from Statista.

"Google's areas of interest ranged from more obvious topics such as privacy, cyber security, and autonomous driving to surprising ones such as wind power," wrote the statistics site. The federal forms also showed that the technology giant also had an interest in spectrum allocation, which perhaps offers a hint that wireless Internet or phone service is something the company has at least thought about. 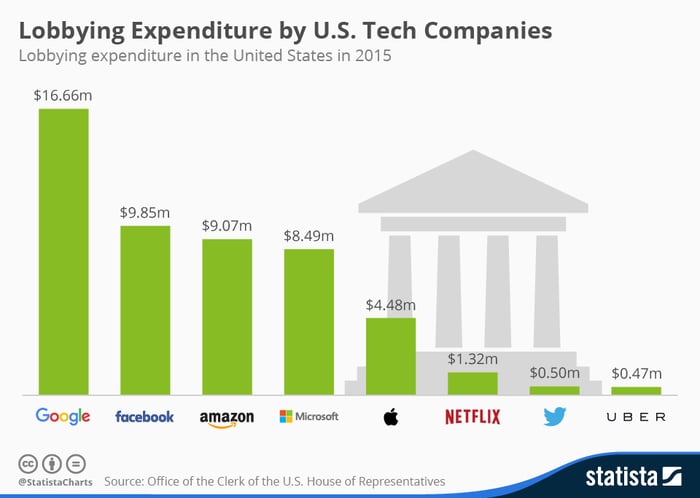 What are the other big players lobbying for?
The federal database merely compiles each company's quarterly disclosure form, and the forms are little more then check-off boxes. There's very little write-up provided, but here are some of the areas the rest of the top five on the preceding chart -- Facebook, Amazon, Microsoft, and Apple -- spent their money on in the most recent quarter for which they have reported.

Facebook: The social-media company spent about $2.1 million in Q4, 2015 on issues including cyber security, data security, and terrorism. It also put some lobbying might into "discussions regarding comprehensive reform of immigration system, including temporary high-tech worker visas and employment-based permanent residency," according to its disclosure. In addition, the company lobbied for "more transparency around national security-related orders;" and how the government can access data stores abroad in national-security situations.

Microsoft: While Microsoft is not overtly creating driverless cars or using drones for delivery, it shared many of the same concerns as its rivals, according to its Q4 disclosure. The company spent $2.4 million in the last three months of the year on a large list of areas with many related to cyber security, privacy, and government procurement. Microsoft also lobbied various members of Congress over online child safety and human trafficking concerns. The company, like most of its rivals on this list, also weighed in on visas and the rules regarding bringing overseas workers into the United States.

Apple: It's a bit surprising that Apple, despite having the largest market cap in 2015 of all the companies on this list, spent only the fifth most on lobbying of any tech company. In its Q4 disclosure, the iPhone-maker declared that it spent a little over $1 million in Q4. The company lobbied for patent reform, corporate tax reform, and a number of issues related to student privacy and digital learning. Apple also spent money lobbying on international trade issues and on mobile payment.

What does lobbying mean for investors?
Whether you like the system or not, spending money on lobbying gives bigger companies an edge over smaller rivals that lack the resources to do the same. In some cases, the money these companies spend can benefit the entire tech industry, In others, it can tilt the advantage toward them over emerging rivals.

Google, for example, might be able to influence driverless cars subtly in favor of how it plans to bring them about. Amazon could do the same for drones and any of the above might work to change visa rules to benefit their needs.

That may not be fair, but it's how the system works now, and these technology companies are simply working the rules to their own advantage while sometimes also supporting the tech industry at large. It's Congress's job to sort out, where lobbying is an effort by the rich to get richer -- something most reps are most likely not overly concerned with.

In the grand scheme of things, this is tiny money being very well spent by these companies if you're a shareholder. Lobbying may not be what's best for the country, but it clearly helps the companies that spend money shape the rules that they operate under.

Suzanne Frey, an executive at Alphabet, is a member of The Motley Fool's board of directors. Daniel Kline owns shares of Apple, Facebook, and Microsoft. He looks forward to piloting his drone for a driverless car. The Motley Fool owns shares of and recommends Alphabet (A shares), Alphabet (C shares), Amazon.com, Apple, and Facebook. Try any of our Foolish newsletter services free for 30 days. We Fools may not all hold the same opinions, but we all believe that considering a diverse range of insights makes us better investors. The Motley Fool has a disclosure policy.