With its top seller facing increased generic competition, this could be a very bad year, indeed.

So far this year, shareholders are doing even worse. A little over a month into the New Year, the stock has fallen even further. Could 2016 be its worst year yet?

Tough pills to swallow
At the top of investors' list of concerns is management's expected loss of about $3.2 billion to generic competition for a handful of important products. The biggest losses are expected for cancer drug Gleevec. Outside the U.S., generic competition has already begun eating into EU and Japanese Gleevec sales, leading to a 5% drop in rest-of-world sales to $2.1 billion last year, excluding the effects of currency exchange.

Gleevec sales are about to get much worse. On Feb. 1, Sun Pharma began U.S. sales of its generic version of the blockbuster therapy.

The $2.5 billion Novartis recorded in U.S. Gleevec sales last year will probably be its high water mark, and the slide from there should begin gradually and accelerate through the end of the year. Sun Pharma has a 180-day exclusivity period, and then it's open season for other generic drugmakers. As is typically the case, the additional entrants are expected to race each other to the bottom.

Gleevec isn't the only one of Novartis' former blockbusters to suffer losses at the hand of inexpensive generics last year. The Diovan franchise, previously the company's largest source of revenue, took another big hit last year. Worldwide sales plummeted 45% to $1.28 billion, with further losses expected this year.

Diovan woes have spilled over to Exforge, a combination that includes Diovan's active ingredient. Worldwide sales of the hypertension drug slid 25% to $1.05 billion last year, largely due to U.S. generic competition. With Exforge patent challenges in some EU countries, its days of blockbuster status are numbered.

Lights ahead
While there's plenty to be upset about, it's not all doom and gloom for Novartis. Two recently approved drugs, Cosentyx and Entresto, are giving optimistic investors something to cheer for.

Although the competitive landscape for psoriasis and related indications is getting crowded, Cosentyx has already distinguished itself with superior efficacy data in a head-to-head trial with Johnson & Johnson's Stelara. Just 28.4% of patients receiving J&J's blockbuster biologic achieved completely clear skin after 16 weeks versus 44.3% of patients on Cosentyx.

Annual Stelara sales rose 19% to $2.5 billion last year. With less than a fifth of Cosentyx's addressable population on a biologic, and superior efficacy data in hand, a peak annual sales estimate of $5 billion seems reasonable.

Less crowded is the competitive landscape for heart failure therapy Entresto. Although sales of the drug reached just $21 million after launching in July last year, it has the potential to reach annual sales of $10 billion.

In a head-to-head trial with the standard ACE inhibitor, enalapril, patients receiving Entresto showed a 20% reduction in cardiovascular deaths and a 21% reduction in heart failure hospitalizations. There hasn't been a major improvement over the standard of care in years.

Generic enalapril has been available for more than a decade and costs pennies per pill. At $12.50 per day, or $4,560 per year, it will take some time to convince end payers of Entresto's overall value. The good news is that America's largest pharmacy benefit manager, Express Scripts, added Entresto to its 2016 preferred formulary, and I think it's just a matter of time before it becomes standard treatment for its approved indication.

Currently, Entresto is indicated for heart-failure patients with reduced ejection fraction, which represents about 2.2 million eligible patients in the U.S. and about 5.2 million throughout Europe. That's a huge addressable population, but it could get much larger.

An outcome study in heart-failure patients with preserved ejection fraction is under way, a condition describing a possible majority of all heart-failure patients. Another outcome study with patients at risk of heart failure following a heart attack is in the works, as well. If these trials produce results similar to those that earned Entresto its first indication, Novartis investors have plenty to be optimistic about.

The worst year yet?
Unfortunately, optimism is in short supply this year, as evidenced by the sliding SPDR S&P 500 index, and the plummeting SPDR S&P Pharmaceuticals index: 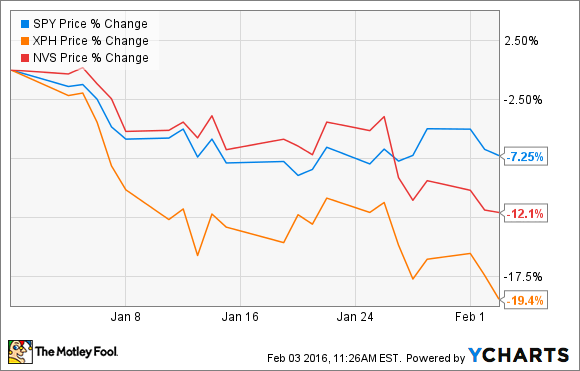 I believe Cosentyx and Entresto can eventually offset impending losses to generic competition, but this is already shaping up to be the worst year ever for Novartis. If overall industry sentiment doesn't improve, 2016 could be a year Novartis shareholders will want to forget.