Please ensure Javascript is enabled for purposes of website accessibility
Log In Help Join The Motley Fool
Free Article Join Over 1 Million Premium Members And Get More In-Depth Stock Guidance and Research
By John Abbink - Feb 10, 2016 at 8:33AM

Fluor is identified with oil and gas, and it's suffering accordingly, but orders are migrating from upstream to downstream, and at current prices, the stock, while still risky, is worth a look.

Apart from extractive industries, there are few businesses more obviously out of favor than Fluor's (FLR -1.72%) -- and largely because of conditions in extractive industries. Fluor is a construction company that specializes in big stuff: highways, pipelines, petrochemical complexes and, yes, oilfields. But major investment is restrained everywhere. Allegedly "stimulative" government expenditure has mostly disappeared down bureaucratic rabbit holes: A prime example is the nine years of ever more costly studies of London airport expansion without a spade of earth being turned. The Keystone Phase IV farrago is now headed to the courts. 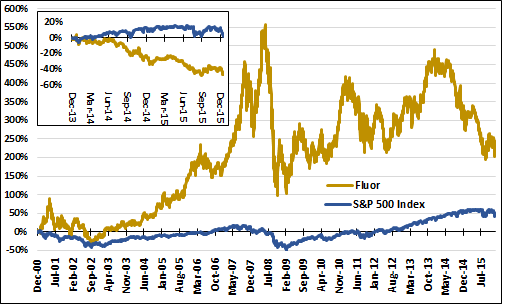 Fluor's order backlog has plateaued, admittedly at high levels. That isn't to say new orders won't materialize -- they're actually trickling in fairly steadily -- only that there's no obvious, compelling economic incentive for them to increase. After a spike in 2014, new orders slowed down considerably in the first nine months of 2015, and there is, of course, a risk that Fluor's backlog will gradually erode. 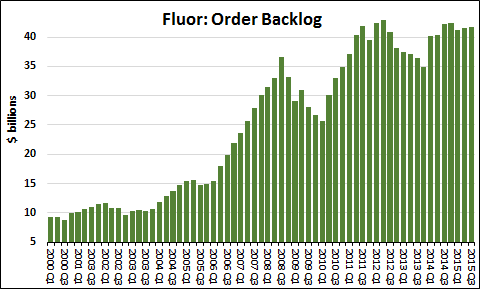 Saudi Arabia is still building enormous amounts of petrochemical capacity, and it will be interesting to see if its national oil company, Aramco, changes its investment policy when it achieves independence. There's been a minor renaissance in chemical industry investment, and some substantial deal-making suggests that there may be more to come. The related area of oil refining investment is also strong, largely to make up for previous neglect: Mexico's Pemex announced major investments in December, and Fluor won a sizable contract from it.

Investment in electricity generation continues, at least in the developing world, with orders from Qatar, Egypt, Turkmenistan, and Indonesia in Q4. If the U.S. continues to discourage coal-fired electricity, there's stupendous investment required to meet current, let alone future U.S. needs -- a reason to suspect that discouragement will abate. There's a steady dribble of tax-driven "green" projects such as the 28-megawatt U.K. biomass facility Mitsui won in December. There are several possible major energy projects, including a Kenyan pipeline, as well as numerous high-tension transmission lines and gas processing facilities globally.

In transport, a Maryland LNG export terminal was approved in September. Now that the U.S. exports crude oil, it's likely that facilities previously used for imports will require modification. The reverse may be true for agricultural commodities: Accommodation for increasing imports is lacking. Other exports may also need infrastructure: Like most European biomass projects, the one mentioned will save taxes and the planet by burning North Carolina wood pellets. Thanks to Panama Canal expansion, there's urgent need to adapt harbors to larger vessels, such as increasing the clearance under New Jersey's Bayonne Bridge. U.S. railways could also generate demand. Positive Train Control will continue to demand major investment, but railways are anxious to get past this mandated expenditure and invest in productivity. CSX, with swathes of its network still single-track, is a big potential customer. There may yet be hope for the Hudson rail tunnels. Every traveler knows that airports are continually under construction: Projects are proposed or under way at an astonishing 542 of them worldwide, and more are proposed. However, major U.S. highway investment is caught in the mire: The demise of the Columbia River Crossing and delayed widening of I-77 are examples.

While there's little reason to hope for a boom in major construction, there's no cause to despair over Fluor's outlook. Oil and gas, which accounts for 69.7% of its order backlog, will gradually shift from upstream to downstream orders. The ride will not be smooth, and there is a chance that some upstream orders will be canceled or delayed (oil sands projects surely must be vulnerable), but investors are wrong to fear that this portion of Fluor's business will simply evaporate. Investment in refining and chemical plants has been depressed for years, and catch-up investment is overdue. Low oil and gas prices are basically good news for refiners and chemical manufacturers. Slowdowns in emerging economies aren't likely to affect such projects, whether announced or in the planning stage: They're long-tail investments that won't be affected by near-term weakness, and in many cases they serve their host countries' export industries.

At current prices, Fluor is trading at 11.3 times Yahoo! Finance's consensus estimate for 2016: Not a bargain price, but within sight of one. At these levels, surprises at the company are most likely to be positive. It was a brave investor who bought Fluor in Q1 2010, but the rebound in orders from there was remarkable, and something similar could happen now. In the nature of Fluor's business, orders are bumpy and a single order can be transformative. The company has already weathered more than a year of weak commodity prices without witnessing a decline in its backlog: New orders have been weak, but completions haven't been strong, either. There's considerable risk in Fluor at the best of times, but brave investors could benefit if they can build positions even slightly lower than current prices.