Please ensure Javascript is enabled for purposes of website accessibility
Log In Help Join The Motley Fool
Free Article Join Over 1 Million Premium Members And Get More In-Depth Stock Guidance and Research
By Daniel Miller – Feb 10, 2016 at 11:57AM

The paper maker's fourth-quarter earnings report put the finishing touches on a brutal year for the company.

What: Shares of KapStone Paper and Packaging Corp. (KS), a North American producer of unbleached kraft paper and other packaging products, are plunging nearly 24% Wednesday morning after the company reported a poor fourth quarter. We're barely a month into 2016 and the company's share price has been halved. 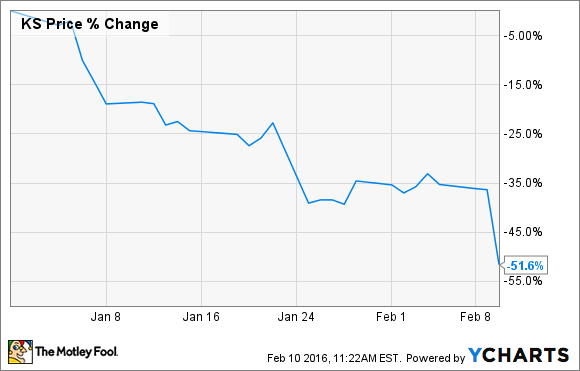 So what: There is no sugar-coating KapStone's results; it was a really tough fourth-quarter. Net sales were down 36% to $764 million in the fourth quarter compared to the prior year, and net income plunged 65% to a meager $12 million. On a per-share basis, KapStone's net income checked in at $0.12, and when adjusted for costs related to mergers and one-time items, its adjusted EPS checked in at $0.17. However, that was far short of consensus estimates of $0.36 per share.

The poor fourth-quarter results capped off a year of struggles for the company, with its full-year sales down 21% and net income down 38% compared to 2014. KapStone's full-year adjusted net income and adjusted EPS were down 28% and 27%, respectively.

Now what: Investors should keep an eye on one of KapStone's strengths going forward -- namely, its cash flow. KapStone generated $54 million in free cash flow during the fourth quarter, which enabled it to pay down debt by $52 million (though it still has $1.5 billion in net debt). If a strong dollar continues, as well as increased competition in its export markets, 2016 will be another tough year for the company.

Why Shares of KapStone Paper and Packaging Corp. Jumped 15% Today