Here are the key points behind Tesla's fourth-quarter earnings report.

Amid a volatile week for the stock market -- particularly for growth stocks -- Tesla Motors (TSLA -1.76%) stock looks poised to contribute its second day of big swings to this wild week when the market opens tomorrow. Shares rose as much as 14% during after-market hours and are up 9% at the time of this writing. An upbeat update on demand, production, cash flow, and guidance may be some of the items that have turned investors optimistic.

But first, here's a review of Tesla's financial results for the quarter, compared against the year-ago quarter and the previous quarter.

While Tesla's revenue is growing, losses continued to widen on both a GAAP and non-GAAP basis. The wider loss is primarily attributable to a lower gross profit margin, which was pressured by "unfavorable labor and overhead allocations associated with lower-than-planned Model X production volume, and non-recurring asset impairment charges for obsolete painting equipment," as well as for a transition to "improved production processes and designs."

Here are some other notable highlights about the quarter's metrics.

Demand is robust: Model X reservations increased 75% compared to the prior year "despite extremely limited initial exposure for this vehicle," Tesla noted. And orders for the new Model S increased 35% during Q4. Overall, Tesla said it sees no "perceptible impact" from falling gas prices on order growth and that order rates for its vehicles have "continued to increase." 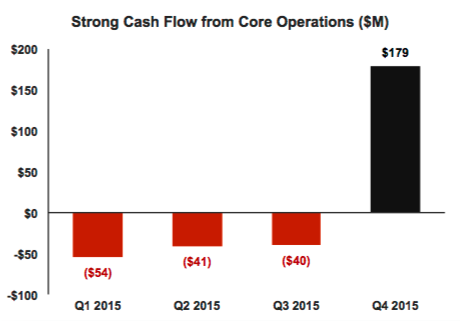 Overall production: Deliveries during Q4 were up 50% sequentially and 77% compared to the prior year, supported by record production.

Model X production: Only a few hundred Model X units were delivered during Q4, but the company says it is "now significantly increasing our Model X production throughout the balance of the quarter."

Looking ahead
Here's a list of some of the company's expectations during the year.