Please ensure Javascript is enabled for purposes of website accessibility
Log In Help Join The Motley Fool
Free Article Join Over 1 Million Premium Members And Get More In-Depth Stock Guidance and Research
By Matthew DiLallo - Feb 11, 2016 at 8:15AM

The shale driller beat estimates despite the collapse of oil prices.

The oil industry is in the midst of its deepest downturn in decades, but you wouldn't know that by Pioneer Natural Resources' (PXD 0.39%) fourth-quarter results. Despite very weak oil prices, the company handily beat the consensus estimate on the back of strong fourth-quarter production, and it's not pulling back the reins on 2016 production growth, either. Those were just a few of the surprises Pioneer unveiled in that report.

1. Surprise! Pioneer beat estimates
While Pioneer Natural Resources is feeling the effects of the downturn in the oil market, it is doing a better job at managing that impact than had been expected. That's evident after the company reported an adjusted loss of $27 million, or $0.18 per share, which was actually $0.12 per share better than analysts were expecting.

Fueling that better-than-expected result was strong production, which average 215,000 barrels of oil equivalent per day during the quarter. Not only was that 2% higher than last quarter, but it was at the top end of the company's guidance range. Meanwhile, costs were at the low end, or below, the company guidance range, which are noted on the slide below: 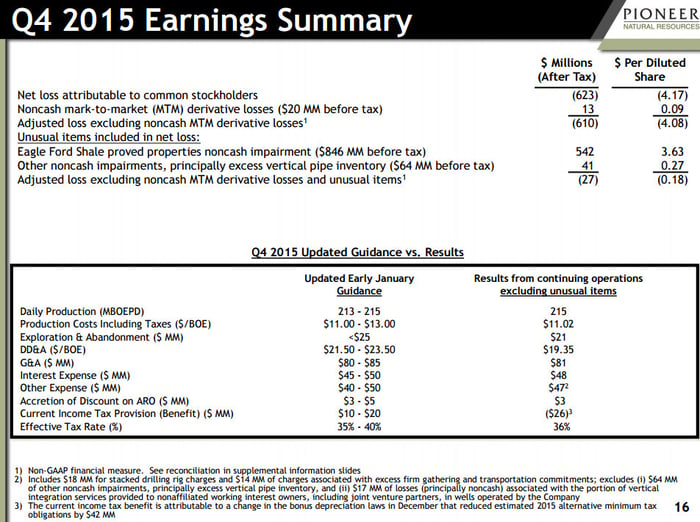 What's especially noteworthy are production costs, which averaged $11.02 per BOE, and were at the bottom end of its guidance range. Those low costs, when combined with strong production, helped the company turn in a much narrower loss than analysts expected to see.

2. Surprise! We're pulling out of the Eagle Ford shale
While Pioneer Natural Resources is weathering the downturn much better than its peers, the company is still feeling the effects of the current market weakness. In fact, oil prices are so weak right now that the company has decided to stop drilling in the Eagle Ford shale, which just a few years ago was the hottest shale play in the country. Needless to say, seeing the company abandon the play for now is quite a surprise.

At the end of last year, Pioneer was operating six drilling rigs in the Eagle Ford, but it is bringing that count down to zero while relocating its two pressure pumping fleets from the Eagle Ford to the Spraberry/Wolfcamp. By stopping all activity in the play, the company's production in the Eagle Ford will decline by 25% year over year.

3. Surprise! We're still expecting double-digit production growth
Despite that steep decline in the Eagle Ford, which will be coupled with a 10% decline across Pioneer's other assets, it expects overall production to grow 10%-plus in 2016. Fueling that increase is a 30%-plus jump in production from the Spraberry/Wolfcamp, which is the sole focus of Pioneer's capital program in 2016. In fact, the company is only reducing its capex budget from its preliminary range of $2.4 billion to $2.6 billion down to $2 billion because it can still earn up to a 30% rate of return at current commodity price projections, which is why it's still aiming to deliver strong double-digit production growth in 2016.

The fact that Pioneer Natural Resources is planning to grow its production at all in 2016 is a surprise. Almost every other driller has reduced their capex program so that production is at least flat, if not set to decline. Leading U.S. independent ConocoPhillips (COP 1.30%), for example, had initially planned to grow its production by 1% to 3% in 2016. However, with oil remaining weak, ConocoPhillips decided last month to ratchet down its spending in order to keep its production essentially flat in 2016. Meanwhile, Continental Resources (CLR 0.47%) is taking its spending reductions a step farther. After slashing its capex budget 66% in an effort to match cash flow with capex, Continental Resources expects its production to fall from the 221,700 BOE/d it averaged in 2015 to 200,000 BOE/d in 2016, or by about 10%.

The key difference between Pioneer Natural Resources and those two is the fact that it has the cash to grow production. Both ConocoPhillips and Continental Resources would have to borrow money in order to boost production, while Pioneer used asset and equity sales to bolster its cash position, providing it with enough cash to deliver double-digit growth.

Investor takeaway
Pioneer Natural Resources has handled the downturn much better than many of its peers. That's partially due to the fact that it's cash-rich and debt-light, which has proven to be a real competitive advantage. In addition to that, it has a very strong position in the Spraberry/Wolfcamp that can deliver compelling economic returns even at current oil prices.

That being said, Pioneer Natural Resources is running the risk of wasting that asset by drilling now when it could hold back this incremental production until oil prices improve. It's a decision that could come back to burn the company if oil prices continue to fall because companies like Pioneer are forcing more production into a stubbornly oversupplied oil market.