The IT giant delivered a mixed quarter, but in a weak macroeconomic environment, that was good enough to send its shares higher.

Despite the bearish sentiment in the market at present, Cisco Systems' (NASDAQ: CSCO) mixed second-quarter results were enough to take its stock higher. It wasn't a flawless report, but the tech giant did enough to dispel fears of an impending collapse in IT spending. Meanwhile, its transition toward more software and software-as-a-service (SaaS) based revenue continues to gain traction, even while its end markets are under pressure. It was definitely a mixed report, so let's take a look at the details.

It's a good idea to separate out Cisco's product and service revenues (product revenue growth tends to lead service growth), and also keep an eye on its deferred revenue. The latter is important as it includes future revenue not yet recognized from things like SaaS -- a key part of Cisco's growth aspirations.

As you can see below it wasn't a great quarter for product sales, but service growth remains solid.

Turning to deferred revenue, year-over-year growth of 8.3% looks impressive, but as the chart below shows, deferred revenue has been sequentially flat for the last two quarters. 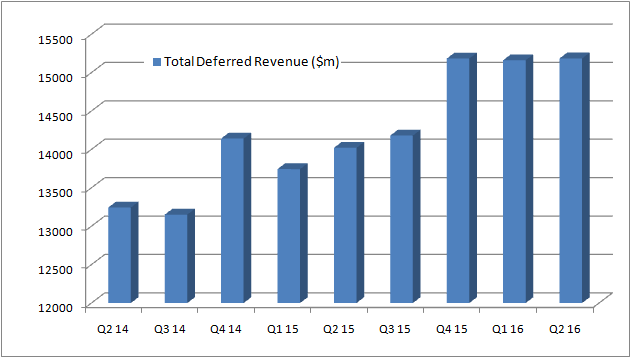 The question of how much revenue growth is being given up by shifting solutions toward cloud-based subscriptions (less upfront revenue, possibly more long-term revenue that shows up initially in the deferred revenue line) came up on the earnings call. In response, CFO Kelly Kramer stated that it was "tough to quantify," but it was "certainly something" from revenue -- something to consider when looking at Cisco's weak headline growth numbers.

Segment details
Turning to segmented details, Cisco's core revenue (switching and routing) saw mixed performance. When last quarter's results were released, management outlined why it was confident that routing would return to growth, and as you can see below, routing had a good quarter. However, switching did not. 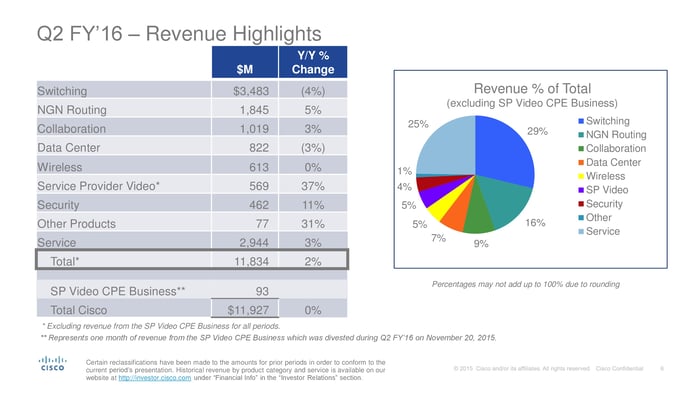 Last quarter, CEO Charles Robbins forecast that switching revenue would pass an "inflection point" in the second-half as revenue from next-generation data center switches offsets revenue declines from historical switching in data centers. It's only the second-quarter, but the weakness in switching plus management's commentary suggest the arrival of that inflection point might be delayed.

For example, Kramer described the weakness as a macroeconomic issue: "The 4% decline in switching was largely driven by macro weakness in our campus business, something that we've observed in the past during volatile times as customers pause spending decisions," she said. Meanwhile, Robbins disclosed, "I will tell you that on the new order side on the data center switching business this quarter, we did see slightly positive growth on orders."

Clearly, the weak economy is hurting Cisco, and Robbins spoke of customers pausing "a bit" during the last three weeks of the quarter. On the other hand, areas of critical spending, such as network security, managed to grow -- pure-play network security companies such as Fortinet (NASDAQ: FTNT), and Check Point Software (NASDAQ: CHKP) also delivered good quarters.

Looking ahead
In a sense, it was a typical Cisco quarter, just one with a bit more economic weakness. By typical, I mean low single-digit growth with various parts of the portfolio of business bouncing up and down. For example, BRIC spending and networking bounced back from weak quarters, but enterprise spending and switching remained weak. It was also a negative quarter for data center spending.

However, in a weak economy, a typical quarter is actually a good three months work. Cisco managed to deliver earnings that beat management's guidance, and the company remains a prodigious cash generator. In the current environment, that's enough.