Please ensure Javascript is enabled for purposes of website accessibility
Log In Help Join The Motley Fool
Free Article Join Over 1 Million Premium Members And Get More In-Depth Stock Guidance and Research
By Matthew DiLallo – Feb 11, 2016 at 9:45AM

The price of copper has been under a lot of pressure over the past year. That's despite the fact that the overall copper market remains pretty balanced as well as the fact that its long-term fundamental outlook remains pretty compelling. At least that's the case Freeport-McMoRan (FCX -1.06%) CEO Richard Adkerson made on the company's fourth-quarter conference call where he went into some detail about where Freeport sees the copper market going forward.

Not much has actually changed
Adkerson dove into the current market fundamentals for copper saying that,

Unquestionably, the uncertainty about the global economy is negatively impacting financial market sentiment. China's demand growth is slowing. Our Western demand is not as good as we and others had hoped it would be, but it's still expanding gradually. I'm not going to debate anyone about the market. The market is what the market is. But the facts are that in the copper business differs from other commodities in that there is not an enormous excess supply in inventories. We just show [in the slide below] the exchange stocks that's developed from the end of 2014 to the current date, similar story when you look at total global inventories. But here we have exchange stocks not rising significantly, remaining low by historical standards, at a time when the copper price has gone from $2.88 to $2 from the end of 2014 to the current date. It is -- even looking at the decline in prices so dramatically since the third quarter, inventories are not building. The story is fundamentally, in today's world, the business we're seeing is not as negative as the financial markets are reacting to it. 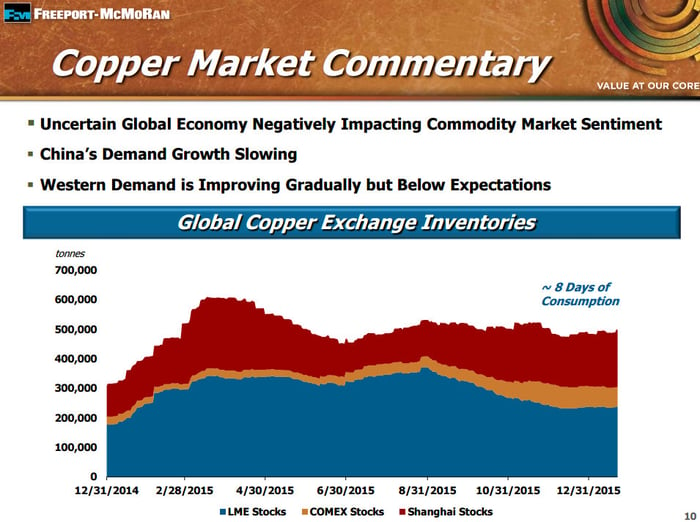 Adkerson makes two key points. First of all, he notes that, yes there is a bit of a slowdown in demand for copper due to China's economic growth slowing down and demand growth in the rest of the world hasn't been as fast as expected. That said, he also points out that this hasn't caused a big rise in copper inventories, which as the slide above shows have been rather flat over the past year. In other words, the copper market fundamentals are quite different from those in the oil market, for example, where slowing demand has been met with surging supplies, which is causing a huge increase in inventories, so much so that there's concern that there could be a shortage of places to store oil. Because of this key difference, Adkerson thinks the market is overreacting and that the price of copper shouldn't be under as much pressure as we're seeing at the moment.

Reacting, but looking forward
Even though the market is overreacting, Freeport-McMoRan really has no choice but to react to the current market in order to get the company through this rough patch. Adkerson noted that in his outlook by saying, "We have no particular insight as to what's going to happen in China in the future. We have to prepare ourselves for what the market is and the market is we've got $2 copper and we've got to react to it." He then detailed the way Freeport-McMoRan and other producers are reacting to lower copper prices noting that, "To date, industry wide, there have been reduction in high-cost mines. Wood Mackenzie says 730,000 tons a year, there will be other cuts if prices stay at this level." In other words, producers are pulling back supplies from the market and will continue to do so if prices remain weak. In fact, Freeport-McMoRan itself has curtailed 350 million pounds of annual copper production, by reducing output in North and South America, including the full shut-down of a mine in Arizona.

As of yet the copper market hasn't reacted to this output reduction, but in time it will see that copper supplies aren't elevated and in fact are depleting quite rapidly, according to Adkerson, who noted that,

All the time, lower-grade ores are coming from existing mines. Mines are depleting. Mines are moving underground. All these things will lead to an ultimate price recovery, in my view, absent just a collapse in the world's economy because today's price is not high enough to incentivize any future development.

This is an industry wide problem, which is one reason why Adkerson concluded his remarks on the copper market by saying that the company "remain[s] confident about the long-term copper markets" even if it has to make hard choices in "dealing with the reality of today's low prices." He's not alone in this outlook. Rio Tinto (RIO 0.11%) actually sees a global supply crunch on the horizon. Jean-Sebastien Jacques, the CEO of Rio Tinto's copper and gold group, recently said in an interview that Rio Tinto is "very bullish on copper" and that it believes "it is the right commodity" because production from the world's largest open-pit mines is declining because of lower-grade ores. Eventually, the market will catch on that the gap between copper production and global demand is razor thin, which will necessitate higher prices in order to incentivize producers to invest to bring on the additional production needed to meet future demand.

Investor takeaway
Times are really tough for copper producers largely because the market is reacting strongly to a slight weakness in demand. In fact, supplies really haven't gotten out of hand, suggesting that fundamentally the copper market is sound. While this disconnect is forcing Freeport-McMoRan to react to the current market, it sees much better days ahead.

Matt DiLallo owns shares of BHP Billiton Limited (ADR). The Motley Fool owns shares of Freeport-McMoRan Copper & Gold,. Try any of our Foolish newsletter services free for 30 days. We Fools may not all hold the same opinions, but we all believe that considering a diverse range of insights makes us better investors. The Motley Fool has a disclosure policy.