Chipzilla needs to either fight to win or get out of the ring.

PC chip giant Intel (INTC 1.36%) has spent countless billions of dollars in an attempt to capture share in the large market for applications processors targeted at mobile devices.

After falling flat on its face in this market over the last several years, management has quietly "de-emphasized" the mobile market, even going so far as to tell investors back in November of 2015 that between 2014 and 2016 it would be bringing down its mobile-specific operating expenses by about $1 billion. 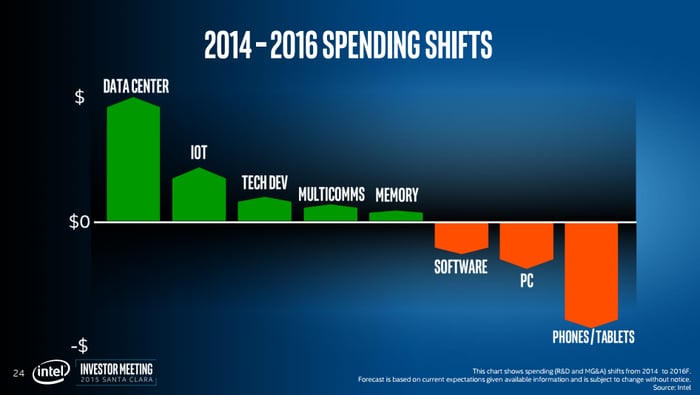 Although the company claims that it's still investing in this market (although I can't imagine what cutting out $1 billion in operating expenses does to morale within the company's mobile division), it's clear that this is no longer a priority for the chip giant.

At this point, I believe that it would be in the best interests of Intel stockholders if the company were to completely wind down this division. Here's why.

How many years has it been?
Intel has been trying to penetrate the market for mobile silicon for years (since at least 2011) and it has essentially nothing to show for it. The company has never released competitive products in this market and it would appear that the competition is only widening that gap between themselves and what Intel can do.

This is just downright embarrassing. To make matters worse, Intel didn't even bother to dedicate any time during its most recent investor meeting to giving investors some sense of the product pipeline for this market that it has in the works, when it had done so in the past.

Speaking of financials...
In Intel's public messaging, management does not talk about potential growth in the mobile market as a "growth driver." In such messaging, Intel talks about how it aims to keep the PC market flat/stable (although that doesn't appear to be happening) and aims to grow through growth in its Data Center, Internet of things, and non-volatile memory businesses. I have not heard management refer to the market for mobile processors as a potential growth market in a very long time.

What Intel does seem keen on emphasizing, though, is that its massive mobile-related operating losses are expected to continue to come down. Note that much of the loss reduction that Intel has achieved to date in this market has been more due to the retraction of subsidies and other cost cutting measures rather than due to strong sales of competitive products.

But, but... what about the IoT? PCs? Isn't everything going to be connected?
One argument that Intel executives have made in the past has been to the effect of: "We'll need connectivity capability for the Internet of Things."

Let's be realistic, though. In applications where a stand-alone modem can be used, Intel can simply buy modems from third party vendors that simply have better/more competitive products than what Intel develops in-house.

However, Intel's "Internet of Things" business seems to be doing quite well targeting applications that don't necessarily require such integrated capabilities (it's a more than $2 billion business today and growing). I question whether the incremental total addressable market that Intel would be able to go after with cellular capabilities in-house is large enough to justify this investment.

Finally, Intel management has talked about more and more laptops (Intel's core business) gaining cellular data connectivity. To date, though, laptops with such capability are still niche. Further, the laptops that do have cellular connectivity do so by way of stand-alone modems, often not even Intel-designed ones.

Shape up or ship out
At this point, Intel either needs to commit to actually producing competitive products and to be more transparent with investors about its efforts, or it needs to simply stop wasting the money that it currently is on pursuing this market. The market for mobile processors is fierce with extremely capable competitors, so if Intel isn't going to give it its all, it might as well not bother.