The midstream company is growing its ability to connect U.S. natural gas supplies with the global LNG market.

The past year has been brutal for Williams Companies (WMB -1.18%) and its master limited partnership, Williams Partners (NYSE: WPZ). The energy market meltdown has not only put downward pressure on Williams Partners' commodity price exposed earnings, but it has limited both companies' access to capital. That said, while times are tough right now, both see better days ahead due in part to the many growth prospects emerging as LNG export facilities are built. In fact, Williams just captured two such opportunities after signing long-term contracts with two shippers on its Gulf Connector project. Those contracts, however, are just a small part of what lies ahead as LNG projects currently under construction head toward completion and additional capacity is built.

Details on the latest deal
Williams Partners announced on Thursday that it had signed up two shippers for a 475,000 dekatherm per day expansion of its Gulf Connector project. That project, which is shown on the slide below, will involve adding compression and making natural gas flow in both directions: 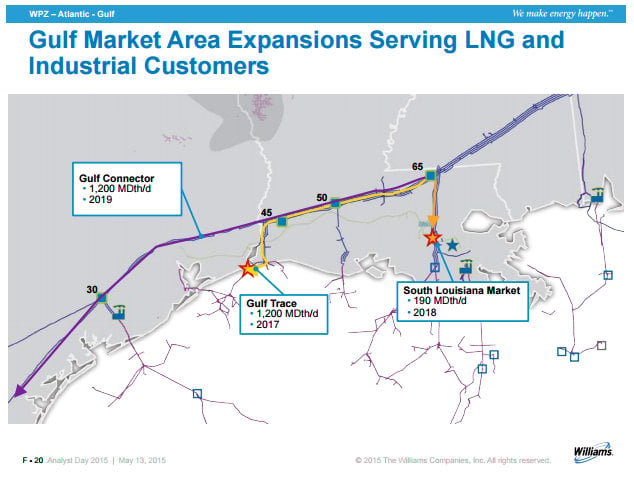 The Gulf Connector project will deliver gas to LNG export facilities that are currently under construction in Corpus Christi and Freeport, Texas. The Corpus Christi facility has proposed to have up to five liquefaction trains, with two currently under construction and expected to be in service in late 2018 and mid-2019, respectively. Meanwhile, the Freeport export terminal will have three trains, with operations expected to commence in phases between Sept. 2018 and Aug. 2019. Because of this phased approach, Williams should see steady volume growth as these projects come on line.

Here's what lies around the corner
The Gulf Connector project, however, is just one of many projects Williams either already has under construction or is pursuing. One project already under construction is the Gulf Trace Project, which will serve the Sabine Pass LNG export facility in Louisiana. That facility is the first large-scale operational LNG export facility in the U.S. and is expected to send its first shipment soon. It will ramp up its output over time with the Gulf Trace project starting to supply gas to it by early next year when it goes into service.

Beyond these projects, Williams sees a strong future in supporting the growth of LNG exports, which are expected to be the main driver of natural gas demand through 2025: 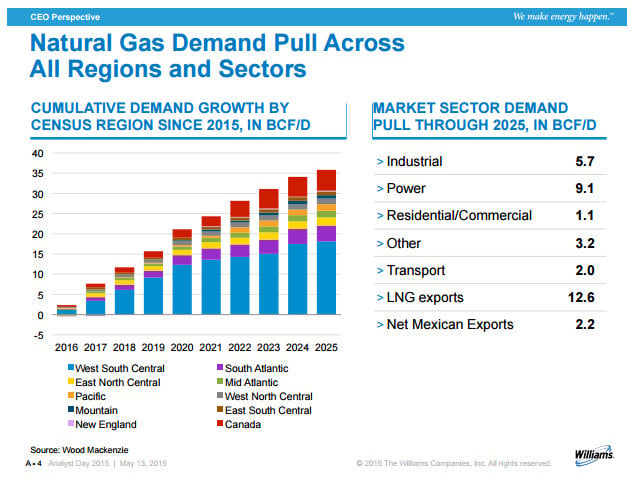 Williams believes it is well positioned to participate in this demand growth because of its Transco pipeline, one of the largest in the U.S. as it supplies natural gas from New York City to South Texas. Because of its size and scale, Williams can easily expand the pipeline to meet future demand growth, which is what it's currently doing with the Gulf Connector and Gulf Trace projects. Additional projects like these can be connected to Transco in order to supply incremental natural gas demand as LNG export facilities expand, such as the additional proposed trains at Corpus Christi, or are able to debottleneck and grow their production. Given the projected growth in demand, there should be plenty of opportunities for Williams to serve this growing market in the years ahead.

Investor takeaway
LNG is expected to be the biggest driver of natural gas demand growth over the next decade. That's a major opportunity for Williams, and one that it believes it can continue to capture thanks to the strategic location and expandability of Transco. Investors have lost sight of the long-term story in recent months, but it's one that appears to remain very much intact given Williams Partners' recent contract wins.