Investment firm BlackRock (NYSE:BLK) oversees more than $4 trillion in equity, fixed-income, and cash assets for clients around the world. Its position as the world's largest asset management company has been a boon for shareholders, as BlackRock's stock price has closely tracked the market's steady rise -- as measured by the S&P 500 -- over the past half-decade. 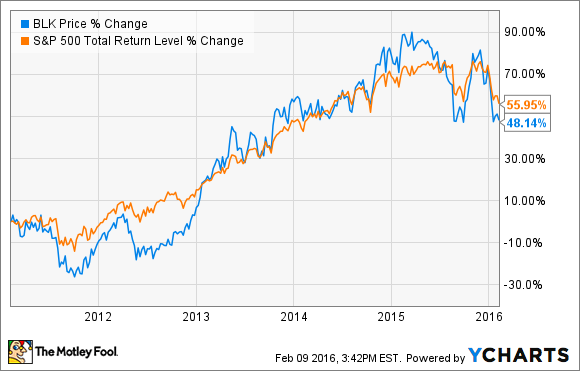 Yet this also highlights one of the major risks inherent in BlackRock business: its dependency on rising asset prices to fuel growth. And with the market off to one of its worst starts in history so far in 2016, BlackRock's stock price has mirrored the S&P 500's descent. 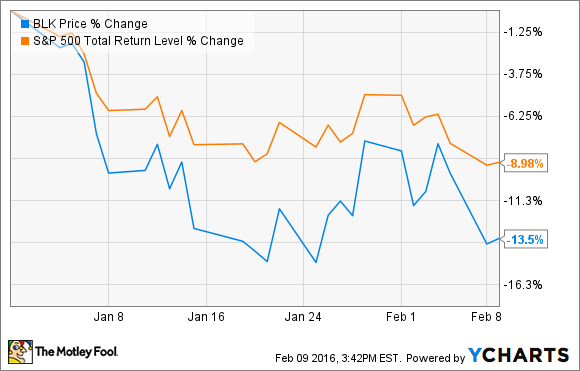 With signs pointing to continued market volatility in the months ahead, BlackRock's shareholders may be in store for a rough ride in 2016. Here's why.

1. The tide could go out

Because they generate fees from their assets under management, investment companies such as BlackRock are innately leveraged to the performance of global financial markets. Higher asset prices have served as a rising tide that's helped to lift many asset management boats for much of the past the past six years. However, when that tide reverses -- and it has so far in 2016 -- asset managers can get hit by a violent storm of lower asset values and sizable net outflows as investors flee the market.

BlackRock is better positioned than just about all of its rivals to withstand these difficult market environments. The firm is well diversified across asset classes (equity, fixed-income, etc.), investing styles (active and passive/index), and geographic regions. So a downturn in one area of BlackRock's business could be offset by an upswing in another.

And BlackRock's large base of institutional customers is less likely to panic than individual investors during severe market declines. Still, these professional investors may rotate toward BlackRock's lower fee fixed-income and cash products during a market meltdown, which would pressure the company's margins.

2. Alpha can be fleeting

In addition to the overall returns of global markets, BlackRock's investment performance relative to its rivals is another key determinant of AUM growth.

Impressively, 91% of BlackRock's active taxable fixed-income assets and 90% of its "scientific" (read: quantitative) active equity assets were above their benchmarks or peer averages for the last three years, as of the end of the fourth quarter. And although BlackRock's fundamentals-based equity business has fared less well, performance has improved over the last year, with 76% of the company's fundamental active equity assets outperforming their benchmarks during that time.

While these returns clearly demonstrate BlackRock's investment prowess, market outperformance -- or "alpha" -- can disappear quickly. Even the best investment managers can go through a rough stretch, and the "What have you done for me lately?" attitude among many investors can make them quickly disregard even decade-long streaks of prior outperformance.

Such was the fate of investment firm Legg Mason (NYSE:LM), which lost billions in assets under management after star mutual fund manager Bill Miller followed his incredible 15-year streak of beating the S&P 500 with a disastrous year in 2008. Miller's losses during that single year completely eliminated his prior outperformance, and the fund lost more than 70% of its assets that year alone. In the years that followed, Legg Mason continued to bleed assets, and its stock price cratered even as the S&P 500 rose steeply from its depths during the Great Recession. To this day, Legg Mason's stock has yet to recover its losses. 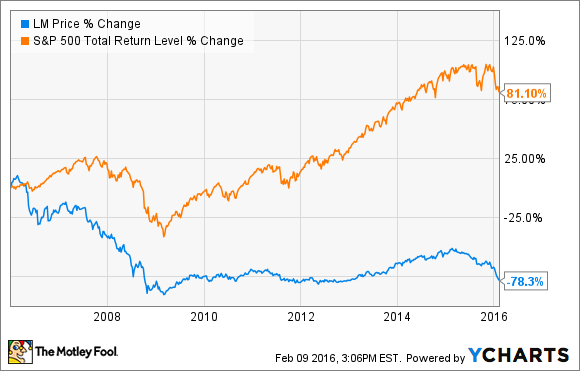 BlackRock, with its 135-plus investment teams, is much more broadly diversified than Legg Mason was at the time of Miller's collapse. As such, the poor performance of one investment manager or team is unlikely to tank BlackRock's business. Still, if BlackRock's investment performance was to decline significantly on an overall basis relative to its competition, it could result in a sizable and rapid loss of AUM -- along with a corresponding hit to revenue and profits.

Assets under management are one part of an investment manager's profit equation. Another is the amount of fees it can charge on those assets. It's in this area that venerable investment company Vanguard is a particularly bothersome threat.

Vanguard founder Jack Bogle has for years crusaded against the evils of high investment fees. And to this day, low fees are part of the bedrock upon which Vanguard's sturdy foundation is built.

Vanguard's seemingly unending drive to lower investment costs continues to serve it well, with the company enjoying record inflows of $236 billion in 2015. At the same time, Vanguard's low-cost strategy helps to weaken its competitors by eating away at their profit margins. To slow Vanguard's advance, BlackRock will likely to have to match its fee reductions with price cuts of its own in the years ahead.

Get the latest BlackRock stock news and facts.