Chipzilla is working to bring these two critical computing elements closer together for performance and profit.

All the way back in 2014, a Mr. Russ Fischer, writing for Seeking Alpha, routinely pounded the table on the prospects of Intel (INTC -0.04%), well known for its semiconductor logic products, becoming a more memory-focused company.

The reason that he thought Intel would dive deeper into memory is simple: as computing performance scales, the memory performance required to feed those increasingly powerful computers increases dramatically.

According to a new job listing posted on Intel's website, it probably won't be too long before we see the company's mainstream Xeon server processors ship with customized, on-package memory of their own.

The proof is in the job listing
Observe the following job listing, pulled directly from the chip giant's website:

If you study the listing carefully, you'll note that the company is working on "new memory technology" that's intended for integration with Xeon processors. It makes sense that Intel will eventually start integrating fast memory on the CPU package in order to boost the available memory bandwidth to these many-core monsters.

What I think is potentially more interesting, though, is that in this listing, the company indicates that Intel has a broader "server memory strategy."

Will Intel go at these new memory technologies alone, or partner up?
Traditionally, Intel has partnered with third parties when it comes to interesting new memory technologies. In non-volatile memory, its NAND efforts (both planar and 3D) have been in conjunction with Micron. The "MCDRAM" that's integrated on package with Xeon Phi was, once again, developed in conjunction with Micron.

It stands to reason that Intel might work quite closely with Micron in developing future memory technologies for its server processors given the long history of collaboration that the two companies have.

At the same time, though, I am sure that Intel wants to keep any interesting/proprietary memory technologies exclusive to its own processors and doesn't want to help to enable its competition.

Indeed, Intel seems to be betting its future on continued dominance in the highly lucrative market for server chips, and having access to technologies that no other company does is certainly a way to cement said dominance.

The ultimate impact of including proprietary memory on-package
I don't think we will see a shift away from traditional memory modules in the server market anytime soon; even the Xeon Phi processor with on-package memory still supports quite a lot of traditional DDR4 memory (far more than can be placed on package).

Indeed, in a presentation at Hot Chips 2015, Intel showed that the MCDRAM on Knights Landing can be used in three ways: as a very large "cache memory" for the CPU, in conjunction with the DRAM, or in a kind of "hybrid" mode (see the slide below). 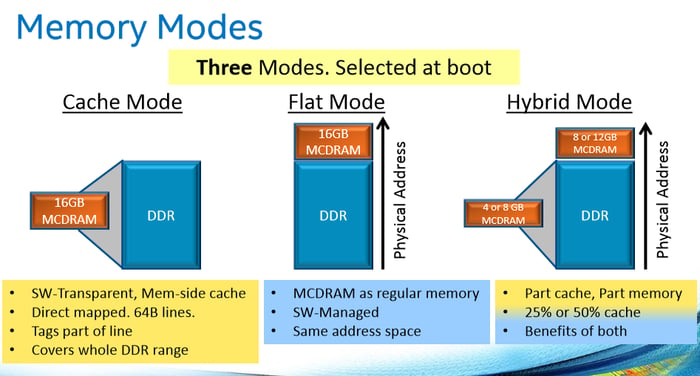 I suspect that whenever we see future mainstream Xeon processors with on-package memory, buyers will have these same options. It doesn't stand to reason that the traditional memory industry will suffer greatly as a result of Intel putting this memory onto the processor package; I view it as additive to the overall memory content inside of server systems.

Where I see financial upside for Intel is that the on-package memory should add real value to the products, allowing the chip giant to further bolster its average selling prices as a result of including high-value memory right with the chip.