Please ensure Javascript is enabled for purposes of website accessibility
Log In Help Join The Motley Fool
Free Article Join Over 1 Million Premium Members And Get More In-Depth Stock Guidance and Research
By Asit Sharma - Feb 12, 2016 at 11:00AM

The snack and beverage giant closed out 2015 with higher earnings. But in its fourth-quarter 2015 earnings release, management put forward a flat growth scenario for the rest of the current year. 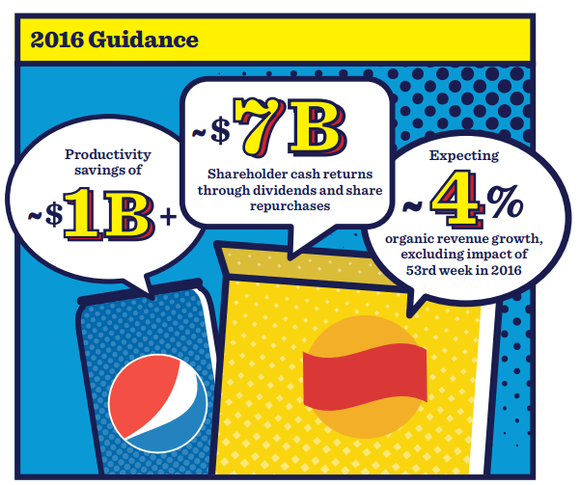 In its final quarter of 2015, PepsiCo (PEP -1.41%) made the most of a challenging environment for U.S. based multinationals and weathered a currency-induced revenue decline to post higher net income. Below, we review salient points from the company's earnings report released Tuesday, and discuss management's outlook for the rest of the year.

What management had to say
PepsiCo's management has emphasized the difficult global economic environment when discussing results over the last few quarters. Q4 2015 provided no exception. CEO Indra Nooyi noted the following on Tuesday in the earnings release:

Our portfolio has been strategically designed to weather the current macroeconomic challenges. Our results reflect the balance of our brand portfolio, geographic footprint, consistent marketplace execution and a relentless focus on productivity. While facing the challenges of a choppy macro environment, we continued to make thoughtful investments in our future. By making investments in our brands, product innovation and supply chain, we have fortified our business for sustained growth.
Our financial performance translated into strong cash generation, enabling us to continue to provide attractive cash returns to our shareholders. In 2015 we returned more than $9 billion to shareholders in the form of dividends and share repurchases, bringing our cumulative 10-year shareholder cash returns to more than $65 billion.

In brief, management believes revenue growth will be challenged in the near term, so it's focused on actions that will boost net income and consequently earnings per share. In the absence of brisk global consumer demand, and under the constraint of relative U.S. dollar strength, PepsiCo intends to tweak productivity and cost efficiency, while continuing to allocate its excess cash flow to shareholders. Again, this strategy is very similar to the one Coca-Cola is employing for the time being: bulk up the bottom line until an environment conducive to revenue expansion returns.
Looking forward
PepsiCo projected a full-year organic revenue gain of 4% on Tuesday, accompanied by currency impacts of negative 4%, which is essentially a prediction of flat reported revenue for the year.

However, management is also counting on productivity savings of $1 billion in 2016, which will help achieve the company's goal of improving "core," or adjusted earnings per share, by 8%, to $4.66.

While these numbers aren't overly ambitious, PepsiCo may be setting itself up for some possible earnings surprises should the long dominant U.S. dollar weaken in 2016. At least in the first few weeks of 2016, such a scenario isn't out of the question: The AMEX Dollar Index, which tracks the greenback against a basket of major world currencies, has declined 3% so far year to date.

But if the year pans out in accordance with management's guidance, the company still offers shareholders incentives to remain invested. Of $10 billion in targeted 2016 operating cash flow, PepsiCo will incur capital expenditures of $3 billion. As the colorful graphic at the top of this article indicates, PepsiCo plans to return the difference -- its free cash flow -- to investors via the announced dividend increase and four more quarters of significant share repurchases.