The biosimilar pure play is sold off hard despite having good news to share with investors.

What: Shares of Coherus BioSciences (CHRS 8.15%), a clinical-stage biotechnology company focused on creating biosimilar drugs, lost more than 37% of its value during January, according to data from S&P Global Market Intelligence. 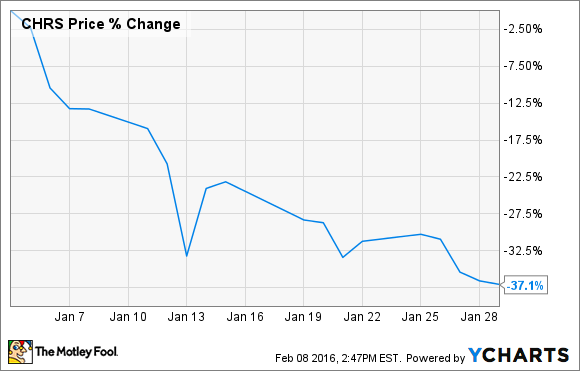 So what: Despite the stock's drubbing, the company did have some good news for investors during the month:

Given that the news flow was positive, it's likely that shares were simply sold off as a result of investors dumping just about everything related to the biotech sector during the month. The iShares Nasdaq Biotechnology ETF fell roughly 20% during January, a clear indicator of a growing distaste for risky biotech stocks.

Now what: In 2014, worldwide sales of the three drugs that Coherus' biosimilars product candidates mimic topped more than $25 billion. If the company can successfully navigate them through the regulatory process, the market opportunity looks huge. Coherus has also wisely aligned itself with deep-pocketed players in the space such as Baxalta and Daiichi-Sanyo, which should make it easier for it to launch the products if they do find their way to market.

Coherus continues to look like it has a very bright future ahead of it, so investors with a strong stomach for risk might want to take advantage of this huge sell-off and put this biosimilar pure play on their radar.